The Stands were packed, The Paddock tense, The Drivers lined up on the Grid and the Five Red Lights went out to Start the 2012 season in Albert Park, Melbourne, Australia. The Weekend had sprung a lot of Surprises.

The HRTs didn't make the grid on Sunday after failiing to qualify within the 107 % rule. Kimi Raikkonen's return was marred by a miscommunication and timing problem relegating him to 18th. The Ferraris struggled too as Massa Qualified a disappointing 16th and Alonso beached his Ferrari in Q2 to finish 12th.

The day however belonged to the McLaren duo as Lewis and Jenson topped the timesheets and Romain Grosjean sprung a big surprise qualifying 3rd. Schumacher, Webber & Vettel completed the top 6. The pace of the Mercedes GP, Sauber Ferrari & the Williams clearly showed that the first would be exciting.

Button jumped Hamilton at the start and Grosjean dropped 3 places into the first turn. Webber was hit from both sides and suffered some damage. Contact at the rear affected Senna. The main beneficiaries were Perez, Alonso and Raikkonen, Perez jumping 12 places in the first two laps. Grosjean's race ended after contact with Maldonado's car, the Frenchman suffering a wrecked suspension. Schumacher was running third before his gearbox failed.

A retired Caterham brought out the safety car and Vettel jumped Hamilton for second place. The restart produced more incidents - most notably the contact between Senna and Massa knocking both out of the race.

The last lap had surprises of its own as Maldonado who had come close to challenging Alonso for 5th place ran too wide on the kerb and was spun into the wall thus wrecking his race. Rosberg suffered a puncture on the same lap when Perez tried a move, the front wing clipping the rear tyre.

The race does indicate how team performances are going to be. The Australian GP done and dusted, it is now time to turn our attention to the First Race in Asia, the highly technical and one of the Best Drivers' circuits - THE MALAYSIAN GP AT SEPANG INTERNATIONAL CIRCUIT.

LOOKING AHEAD TO MALAYSIA :

Sepang is a very technical circuit with fast sweeping corners and a couple of really slow ones. The famed back straight has seen a lot of overtaking. All these circuit characteristics can only point to one designer - THE GREAT HERMANN TILKE!

The Malaysian GP is known to produce some of the greatest races of the season. The rains feature a lot on race weekends and races have been stopped or curtailed thanks to heavy downpours.The 2009 season was curtailed rewarding drivers only half the points.

So what does this year's race have in store for us?

Well the weather forecast shows storms throughout the weekend! We can't stop the monsoons can we? Rain always spices things up and evens out the field.

The first two races are on consecutive weekends. So teams won't have much to improve on the cars they used in Australia.

The McLarens are the favourite to win this race too and I think Button will overwhelm Hamilton again. He is consistent performer like Vettel and a better driver. So beating him would be difficult. Hamilton is ragged and can produce some magical drives but consistency would be needed from him to challenge his compatriot.

Vettel and Webber would be hoping to get some new components in their car to match the McLarens but this seems unlikely this weekend. The Ban of Blown Diffusers has affected the Milton Keyes team this year and changing wind conditons can affect the Red Bull which is more dependent on aerodynamics for performance.

Retirement for Schumacher and the last lap puncture for Rosberg didn't show the true pace of the Mercedes GP. Schumacher is called the Regenmeister ( rain master ) and if he qualifies strongly... you never know.

The Ferraris of Alonso and Massa will struggle according to me. Massa needs a good car to perform and Alonso has proved his driving prowess on more than one occasion by finishing in places that simply flatter Ferrari. Sorry to all the Tifosi fans but I don't see Ferrari on the podium.

Sauber Ferrari seems to be giving the Factory Ferrari a run for their money. The return of some experts of F1 ( retired from other teams ) have helped the team build a strong car. A podium finish for Kobayashi or Perez would be difficult but they seem better equipped than the other mid table runners.

Williams have had reshuffling at the top and the team seem to be slowly returning to the good old days. Maldonado needs to finish and stop making mistakes. He is a great prospect and can get the team a lot of points - provided he finishes! Bruno Senna is quick but has to settle in to return favourable results for the team.

Kimi Raikkonen & Romain Grosjean have got mixed resuts in the previous race for Lotus F1. An ardent fan of Kimi, I would love to see him on the top step of the podium but as it looks a Podium would be a very strong result for Lotus. Kimi showed great race pace as he climbed from 17th to finish a strong 7th, Grosjean's race cut short by the incident with Maldonado. Watch out for the Frenchman though.

The other teams have work to do and I dont see them in the points. Sahara Force India F1 and Scuderia Toro Rosso might just sneak in though.

This will be the first race of the season that I shall be attending!!

TOURISM MALAYSIA have been kind enough to offer me the privilege of watching the qualifying & the race in the grandstands. It's going to be an unforgettable experience for sure. 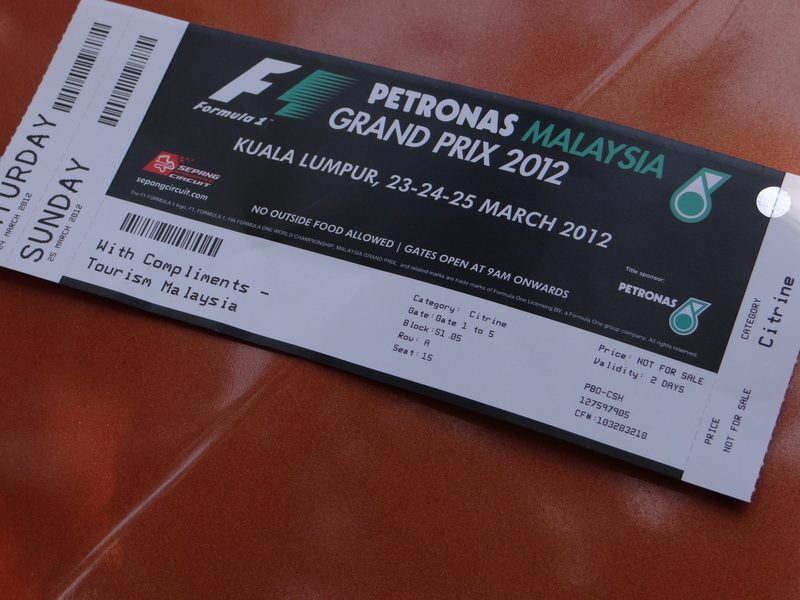 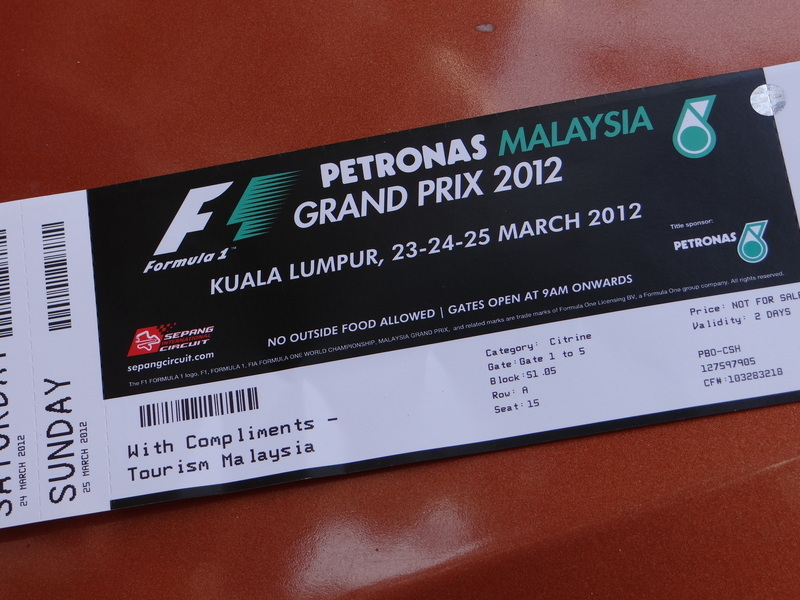