2011 was a season of Dominance. Sebastien Vettel & Red Bull simply pulled away from the Competition. The rest were left battling to be the " Best amongst the Rest ".

2012 though had Big Surprises in store. The return of Kimi Raikkonen to Lotus F1 Team was one such Surprise. His Return ensured that I would follow the sport with renewed vigour. 2012 also took the accolades of being the longest season in F1 History and the only season which featured 6 World Champions - Vettel, Button, Hamilton, Alonso, Raikkonen and Schumacher.

Many Predicted that status quo would be maintained but it turned out to be otherwise.

Ferraris were expected to struggle and Alonso's Victory in Malaysia was simply down to smart strategy in changing weather conditions. Maldonado's victory for Williams at Catalunya & Roberg's for Mercedes at Shanghai too was a famous victory for both teams in a long long time.

Lotus F1 too had a nice start with Kimi notching up 2 Podiums in his comeback year.

The Biggest Disappointment though was for Red Bull who simply couldn't repeat their performances of last season. Ferrari had put all the disappointments of pre-season testing behind as they lead both the Drivers' and the Constructors' Championships.

The Return to Europe in Valencia didn't do Red Bull's Cause any good as Alternator Failure robbed Vettel of a sure victory. Grosjean too suffered the same fate, the Frenchman too had a shot at victory. Alonso was the beneficiary again as he used all incidents to his advantage. Alonso was the first driver in the season to have 2 victories while Raikkonen and Schumacher made it a famous podium. The signs looked ominous...

Mark Webber helped Red Bull to have a comeback of sorts after the Spanish Debacle with a victory at Silverstone and Vettel in 3rd.

Alonso maintained consistency by finishing 2nd in Silverstone and notching up victory in Germany the week after Silverstone. Vettel's Efforts to impress in his home race fell short as he was demoted in the race result from 2nd to 5th for an illegal move on Button. Button and Raikkonen completed the Podium.

Hungary saw the resurgence of Hamilton's Title Challenge with the Lotuses of Raikkonen and Grosjean completing the podium.

Alonso's lead now stood at 40 points and the Spaniard seemed to be favourite to win the title.

Belgium saw a Horrific First Lap incident where Romain Grosjean made contact with Lewis Hamilton and they both slammed into Fernando Alonso and Sergio Perez, eliminating all four on the spot. Vettel reduced the lead by 18 points by finishing 2nd. Button won the race with Raikkonen showcasing some daring moves to take 3rd.

The European Leg ended and the rest of the races were all " Fly Away " Events. Singapore saw Hamilton's Retirement due to Gearbox Failure and Catapulted Vettel to victory. Hamilton was now out of the Title Race. Vettel was now in Title Contention.

Alonso suffered another retirement after contact with Raikkonen on the First Lap and Vettel took advantage of the same to score a full 25 points. The championship fight became as close as it had been all season long. Massa and Kobayashi completed the podium with the latter overwhelmed by the Home Support, first podium for a Japanese Driver since Suzuki in 1990 ( At Suzuka ). Schumacher announced his retirement on the same weekend, this time he wouldn't return.

The Tables turned in Korea. Vettel was now on a rampage as he wrestled back the lead from Alonso with a victory. Webber ensured a Red Bull 1-2 and Alonso ensured damage limitation in 3rd.

The Next Stop - India!! Vettel was in no mood to slip-up and dominated the race to be a 2 Time winner at the Buddh International Circuit. Alonso Benefitted from a Failed KERS unit on Webber's Car to take 2nd while the Australian held off Hamilton to take the final spot on the podium.

Abu Dhabi seemed to have changed the dynamics of the Title Race again. Sebastian Vettel's dominant run was derailed in Abu Dhabi when his car was found to have insufficient fuel after qualifying and he was subsequently moved to the back of the grid. Hamilton's March to Victory was again cut short due to a mechanical failure while Vettel kept moving up the grid, a couple of Safety Car Incidents helping his cause. KIMI RAIKKONEN the ICEMAN was leading the race. Lotus F1 went through a lot of tension and just wanted to ensure victory by ensuring everything was in perfect order. The Iceman though just asserted his authority on the team radio amusing one and all with two sentences that have become world famous. Kimi Raikkoen held off a closing Alonso to take a Famous Victory for the Lotus F1 team. Fernando Alonso was 2nd and was shocked to see Sebastien Vettel sharing the podium with him!

Alonso was only able to reduce Vettel's Lead by 3 points.

Austin Texas saw United States of America make a return on the F1 Calendar. A Fantastic Circuit saw a fantastic race. Vettel was on the receiving end this time. He was held up by a backmarker with Hamilton closing in on him. Vettel as a result lost the lead to Hamilton. Hamilton took victory with Vettel and Alonso completing the podium. The Result meant that the Driver's Championship would go down to the wire, to the last race in Brazil. Red Bull clinched the Constructor's Title.

Brazil would produce the last bit of drama. Sebastian Vettel was involved in a first-lap clash with Bruno Senna that damaged his exhaust and spun him around, relegating him to last place. Senna retired on the spot, as did Sergio Perez, who was caught in the crossfire. Changing Weather Conditions saw the race change lead multiple leads. Hulkenberg and Hamilton lead the field and a move by the former on the latter went awry to take Hamilton out of the race. Vettel slowly moved up the field, his car's damage slowly aggravating. His 7th then became 6th. A Paul Di Resta crash on the penultimate lap brought out the safety car. Alonso couldn't improve on his 2nd position as a result.

Vettel had overcome all odds to win his 3rd consecutive Driver's title. Alonso was left contemplating as to what could have been.

Three days after the Brazilian Grand Prix, reports began to surface suggesting that Sebastian Vettel's championship was under threat and that Ferrari would be filing a formal protest against the race results. The challenge centred on a pass Vettel made on Jean-Eric Vergne early in the race ( Under Yellow Light Condition ) The FIA cleared the confusion & both Ferrari and Red Bull Racing announced that they were satisfied with the ruling, thereby preserving Vettel's championship.

It was a great comeback year for the Finn.

Sebastien Vettel and Christian Horner with their Trophies : 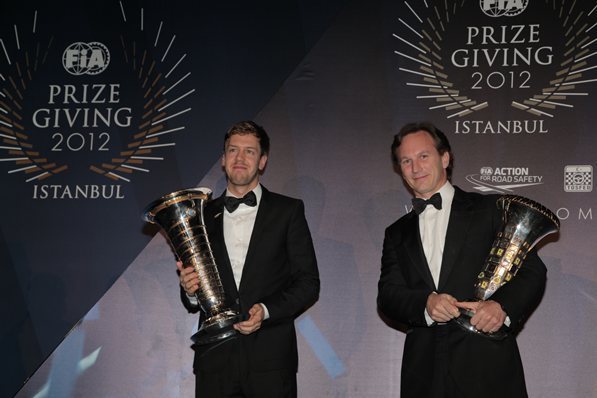 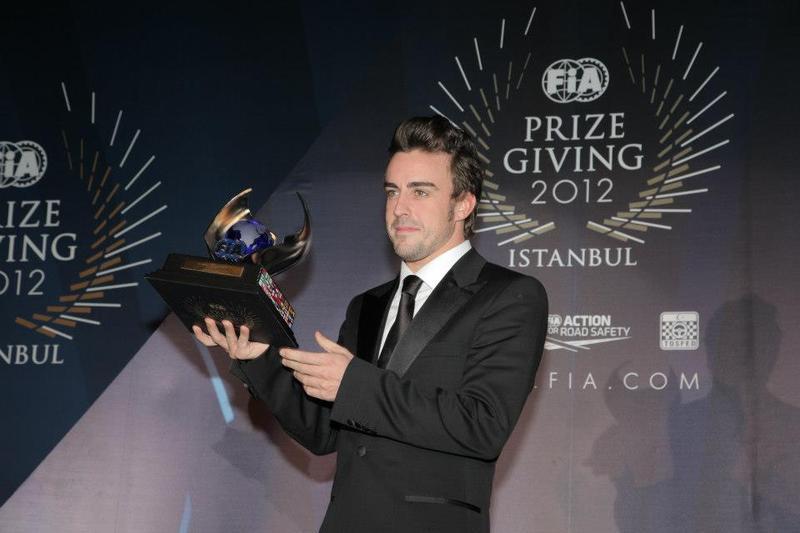 Kimi, Ice Cool as ever in 3rd Place : 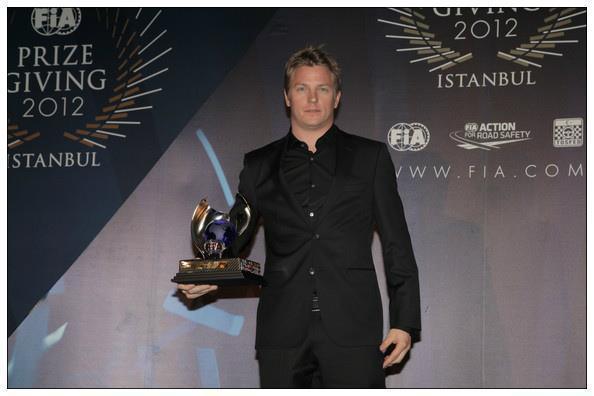 2013 is already on us and the competition would be looking to deny Red Bull Racing another title. Only Time will Tell.....