Red Bull gives you wings!! Most of us never believed this when the commercial came on air. Well Red Bull Racing went all the way to prove this to us in the 2011 season.

2010 was a very competitive season with Red Bull, Ferrari & Mclaren Mercedes fighting for top honours till the end of the season. However the Bulls prevailed and Sebastien Vettel was crowned the youngest Formula 1 champion!

a) Return of the 107 % Qualifying Rule. The Qualifying is divided into 3 sessions; this rule was applicable for Q1.  Under this arrangement, any driver who fails to set a time within 107% of the fastest lap in Q1 may not be permitted to take part in the race i.e. if the fastest Q1 time is 1 min 40 sec, the slowest driver has to be quicker than 1 min 47sec. A driver could however race if he suffered Mechanical Failures prior / during Q1 and was within the 107 % limit in Practice - at Marshall's Discretion.

b) The Biggest change in Formula 1 - Pirelli replacing Bridgestone as the Sole Tyre Supplier to the teams. Pirelli had reentered the sport after 20 years, the last season being 1991. Pirelli introduced 3 tyre compounds for dry races - Super - Soft ( Red Banded ), Soft ( Yellow Banded ) and the Hard ( White Banded ), the Hard Compound rarely used. Pirelli designed a higher wearing tyre leading to 3 stops for many races. Many incidents of Blistering were reported most notably in the Belgian Grand Prix.

c) KERS made a return. Kinetic Energy Recovery System was introduced in 2009, a 35 kg addition to the car's kerb weight. The Principle was simple : The Loss of Power due to braking into a corner would be transmitted via the brakes to a storage battery and this would be returned at the touch of a button causing quicker acceleration and better top speeds on starights. The KERS Battery would be refreshed at the end of each lap. 2011 rules allowed only 20kgs to be added. Most teams used KERS although Red Bull suffered many malfunctions with KERS. Other teams also had mixed results but when it worked flawlessly KERS was Fantastic for the cars.

d) The F Duct system devised by McLaren and Copied by others was banned but DRS was introduced. DRS - Drag Reduction System negates the Downforce flowing over the rear wing. This can be achieved by opening the rear wing and offering the driver an additional 15km/hr. DRS could be used freely during Free Practice and Qualifiying but the use was restricted in racing. Wet Track conditions prohibited the use of DRS. DRS could be enabled only after 2 laps of race completion. The chasing driver needs to be within one second in the Detection zone before he attempts an overtaking move. DRS zones were marked on track and DRS did a fine job of spicing things up in races.

e) Team Orders were Banned. "Fernando is faster than you". 2010 Hockenheim GP was the bone of contention. Rob Smedly, Felippe Massa's Race Engineer gave him this message and a couple of turns later he conceded the race lead to his teammate. Mark Webber was also asked to stop pressurizing his teammate Sebastien Vettel and this didn't go down well with the Australian.

2011 Season kicked off with Victory for Sebastien Vettel. The sheer pace of the Team from Milton Keyes amazed everyone. It looked ominous for Ferrari and Mclaren Mercedes - the true contenders to Red Bull's crown. The expertise of Christian Horner, Adrian Newey was proving fruitful to the team as Vettel Notched up Pole Positions in Qualifying and converting them to Victories. The gap was increasing and the others were struggling to play catchup. A victory for Alonso, Hamilton and Button didn't do much to dent Vettel's hopes for a second title as the German always ensured that he finished on the podium in every race.

Sebastien's consistency coupled with the Red Bull's sheer pace and Reliability help them open a considerable gap in the first part of the season. KERS malfunctioned more than once but the Aerodynamic Experience of Adrian Newey made the Red Bulls literally untouchable. Nine Races into the season and Vettel's lowest finishing position was 2nd !! Germany was the only race in which he finished 4th and the Tyre Burst at Abu Dhabi was his only retirement of the season. The German broke Nigel Mansell's Record of 15 poles at the season ending Brazilian GP but failed to beat Compatriot Michael Schumacher's record of 14 victories from pole. This however was nothing short of special from the German. He won his 2nd title at the Japanese Grand Prix to become the youngest Double World Champion.

Webber played a good wingman to Vettel's title charge although he was unlucky not to get a car as capable as his team mate's. His resurgence in the second half of the season helped him claim 3rd position in the Championship Standings.

Lewis Hamilton had a very troublesome season though. His antics on track didn't gain him many admirers. His duels with Massa were incident packed affecting both in the championship and causing a lot of friction between the two who were once good pals. Lewis' driving style was being questioned as more incidents plagued his races, most notably the one with Team mate Jenson Button in Canada. The Contact between the two wrecked Lewis' race and compromised Button's pretty badly though the latter went on to win thanks to the temporary suspension of the race due to rain. The Formula 1 Drivers Association had planned to discuss Lewis' driving tactics before the Sao Paulo Grand Prix, the details of which are unknown.

Jenson Button performed commendably and overshadowed Lewis' performances. Although both the McLaren Drivers won 3 races apiece, Button's consistency helped him finish 43 points ahead of his team-mate. The Canadian Grand Prix was Special for the Brit as he went on to win the race from the back of the grid - thanks to a rare error by Vettel on the last lap. 2nd place in the championship was all that Button could achieve this season even though McLaren had caught up with Red Bull in the 2nd half of the season.

Ferrari had another dismal season. Fernando Alonso had only the solo victory at Great Britain to show for his efforts. A few podiums helped him finish 4th in the standings, 1 point behind Mark Webber. Felippe Massa didn't manage a single podium in the entire season!! The man who finished 2nd on 2008 a mere shadow of himself. His position in the team could also be in jeopardy if the Brazilian fails to perform in 2012. Steve Slater, the Famous TV Commentator for ESPN Star Sports made a very important point post the Brazilian GP - " If Felippe Massa had scored another 80-90 points, Ferrari would have displaced McLaren Mercedes for the Second Spot in the Constructors."

Mercedes GP were the best amongst the rest as Nico Rosberg finished ahead of the 7 time World Championship winning team-mate Michael Schumacher. The German Duo performed well for the Factory Mercedes and won the 4th position in the Constructors quite comfortably.

The others only became "Also rans" sometimes ending up on the podium - such was the dominance of the Redbulls, The Mclarens & The Ferraris.

However the TOP STEP ALWAYS belonged to ONE MAN - SEBASTIEN VETTEL

After a closely contested season in 2010, 2011 was the advent of a new period in Formula 1, be it rule changes, tyre changes, Team Revamps and novel ways of Overtaking. The entire season was dominated by Red Bull who were rightly Crowned with the Drivers and the Constructors' Championships. The Others have a lot of catch up to do. 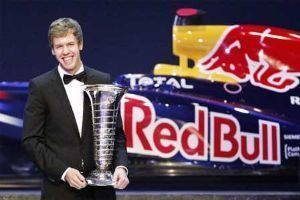