One thing was for certain - Wankhede would be choc-a-bloc with Fans to witness the first game!

The Wankhede Stadium has never seen empty seats - be it the International games or the IPL Matches.

On 12th April 2015, the Wankhede would offer a whole new experience to all its fans!

I was one of the fortunate few to have had the first taste of these on Saturday 11th April 2015.

Mumbai Indians were gracious to offer me a ticket for the game I was looking forward to experiencing the new offerings all over again!


So what were the new offerings in store? - JioNet and JioChat!

JioNet would offer Free High Speed Internet to the Spectators while JioChat ( a Free App available for download ) would offer fans instant messaging, Video Chats and let them explore the latest videos and features uploaded on the official channels listed in the app.

This was the First time that a stadium in India would feature such an offering!

Today's post features the match summary as well as the browsing experience.

En-route to the Stadium 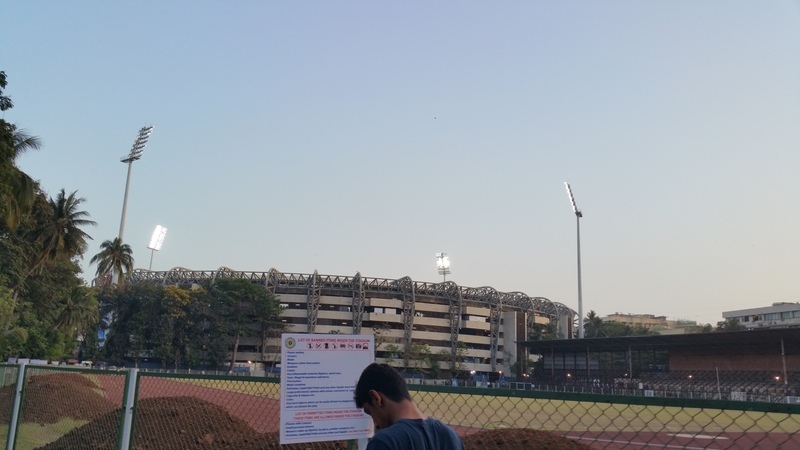 The Teams are busy with the pre-match warm-ups : 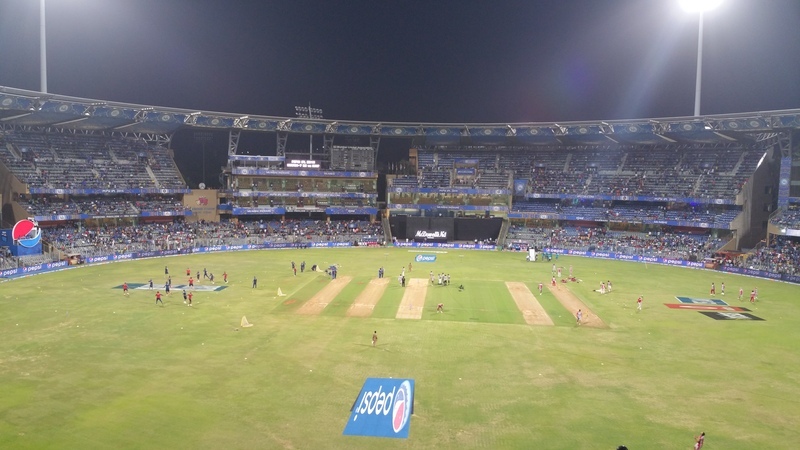 The Toss - Mumbai Indians won the toss and elected to field : 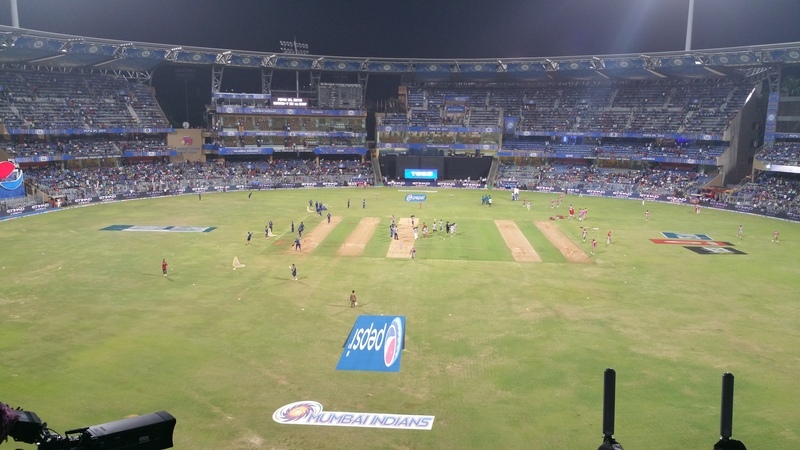 The Stands filling up fast : 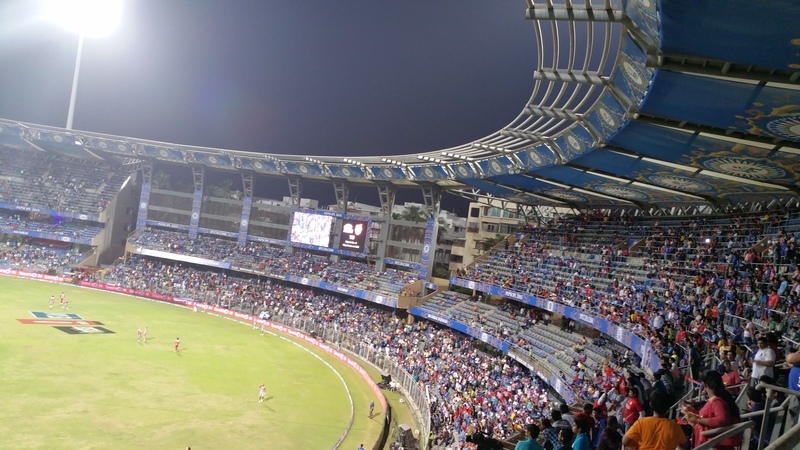 The Match about to commence : 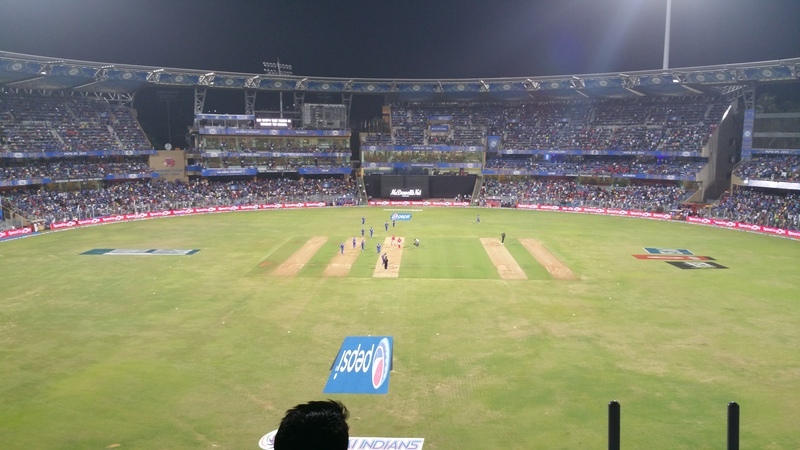 Shots from the Innings : 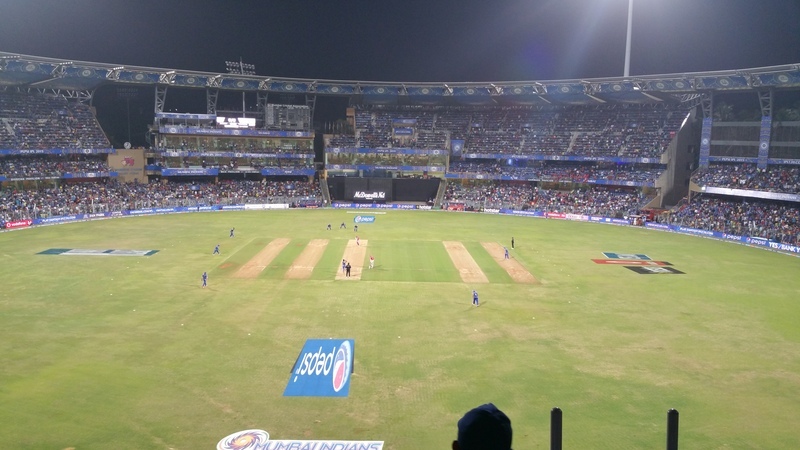 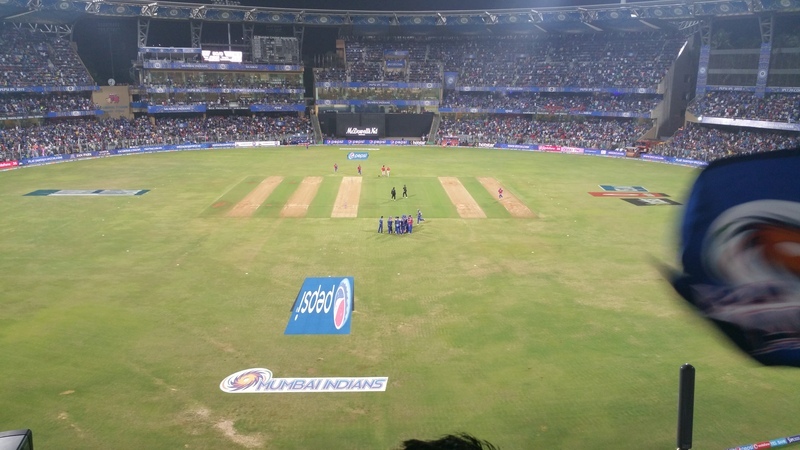 The Strategic Time out : 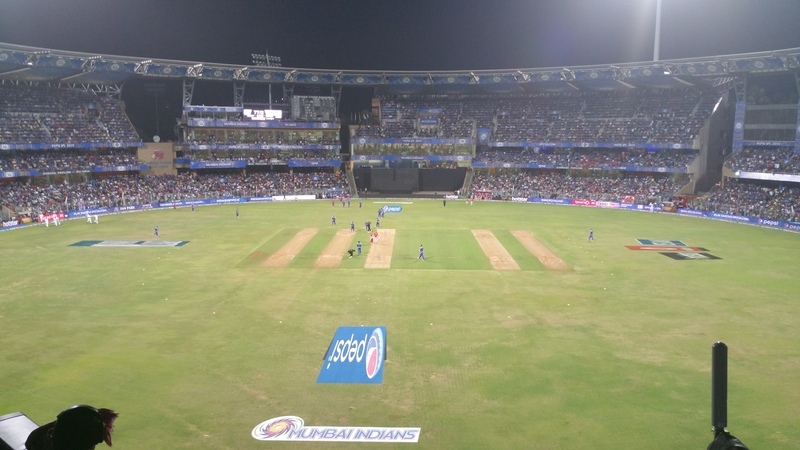 The Mexican Wave and the crowd chanting Sachin Tendulkar's Name. The Legend obliges with a wave to this beloved fans!

Kings XI Punjab got off to a blistering start but a couple of wickets pegged them back. Glenn Maxwell was sent back cheaply and  Mumbai Indians seemed to be getting a grip of the game. However David Miller and George Bailey steadied the ship and the latter went on to make a brilliant 61 to post an imposing total of 177 at the end of 20 overs.

The Chase for Mumbai Indians started on a bad note as Captain Rohit Sharma was dismissed without disturbing the scoreboard.
Aaron Finch seemed to provide some impetus but a great spell by Sandeep Sharma and Mitchell Johnson left Mumbai on the ropes at 46/5 in 11.4 overs. Kieron Pollard was caught at Long-off with the score on 69 and all hope seemed lost.

In stepped Harbhajan Singh. The Turbanator alongwith the debutant Jagadeesha Suchith smashed 88 runs in 5 overs and the clean hitting resurrected the Wankhede Crowd. Chants of "Bhajji", "We Want Six" reverberated throughout the stadium as Mumbai Indians closed in on the target. 30 runs were needed of the final over and it was too much in the end as the home team fell short by 19 runs.

Nevertheless the crowd went home happy thanks to the 7th wicket partnership.


So how did JioNet and JioChat fare on their first day at office?

Spectators were regularly informed about the 2 product offerings through the PA Systems and the Stadium Screen. Representatives were proactively helping spectators log-on to the service and experience it first-hand.

After a few initial hiccups I was able to connect to JioNet and the browsing experience suddenly reached another level!

JioNet offered Seamless High Speed Internet as I posted regular updates of the game on my social media handles. Photos and Videos were uploaded without breaking a sweat ( sweat was due to the High Humidity in the Stadium though :P )

Normally whenever a Service has a large number of users logged on, Bandwidth issues can be experienced but I was fortunate enough to not encounter such an issue.

I used JioChat to converse with a couple of my friends and the Instant Messaging was a lot of fun as it offered Hindi Stickers and Smileys! It was nice to sample such an Indianised app. JioNet ensured that Video Chats didn't experience lagging on JioChat.


I must say that I was very impressed by the services offered and never dreamt of experiencing something like this so early in India.

I have visited many F1 Circuits in my 3 years of travel and No Country has been able to match the service offered by JioNet at Wankhede. F1 Circuits have similar offerings but the number of users logged in cause a lot of network drops.

One might argue that the expanse of a F1 Circuit does not permit the feasibility of such a product  but the concentration of 32000 people within a confined space of a stadium is equally challenging.

Hiccups are part and parcel of any product and it was JioNet's and JioChat's first day at the office. I am sure niggling issues, if any, would be ironed out soon enough.

However one cannot deny that the Wankhede Stadium has sent a new benchmark in India when it comes to offering Fans a better experience!

It was a memorable day at the Wankhede Stadium. Although Mumbai Indians lost, they didn't go down without a valiant fight.

JioNet and JioChat were definitely put through their paces and they are great offerings at the Wankhede!

JioChat is available on the Play Store / iStore.

Technology and Sports must go hand in hand. Sports would have no meaning if Technology wasn't there to help it reach places it could only dream of. Besides ensuring a Global Footprint, Technology has contributed towards ensuring Fairness and Safety in Sports.

However opening up new vistas in terms of Fan Experience at an event is one of the principle functions of Technology in Sports.

Today, I got the first taste of such an experience at the iconic Wankhede Stadium, home to the Mumbai Indians!

JioChat and JioNet are 2 of the latest offerings at the Wankhede Stadium .

JioChat and JioNet would be available for Free ( Yes Free! ) to all the Fans at the Wankhede Stadium for all the Home Games of the Mumbai Indians.

What is so special about these offerings? - It is the First Time a Cricket Stadium in India will offer its fans unhindered, high speed internet access ( JioNet ) and an app  ( JioChat ) with features ranging from chats, calls to official channels featuring the latest news about our beloved Mumbai Indians!

JioNet and JioChat will be put through their paces ( for the first time ) on 12th April 2015 when Kings XI Punjab come visiting.

I was one of the Fortunate Few to be at the Wankhede Stadium today and witness a practice session of the Mumbai Indians.

The Wankhede Stadium in all its glory : 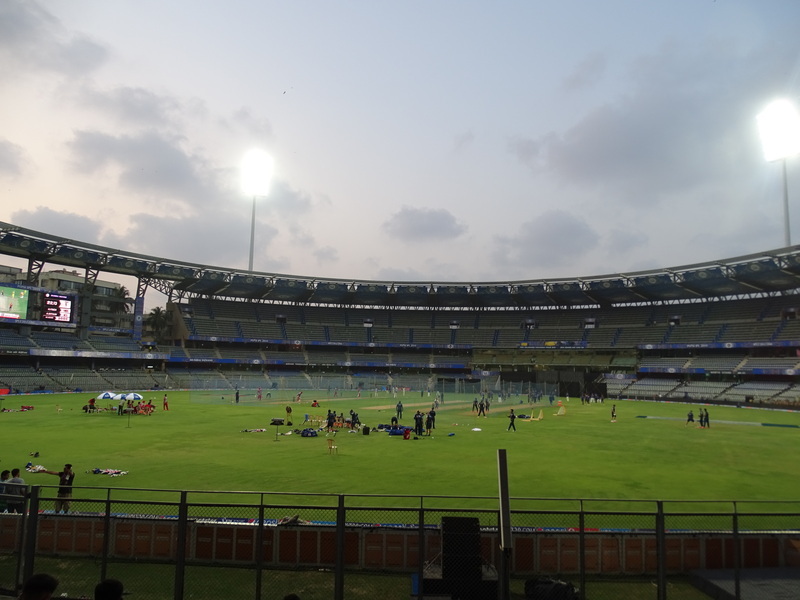 Shots of the Mumbai Indians at practice : 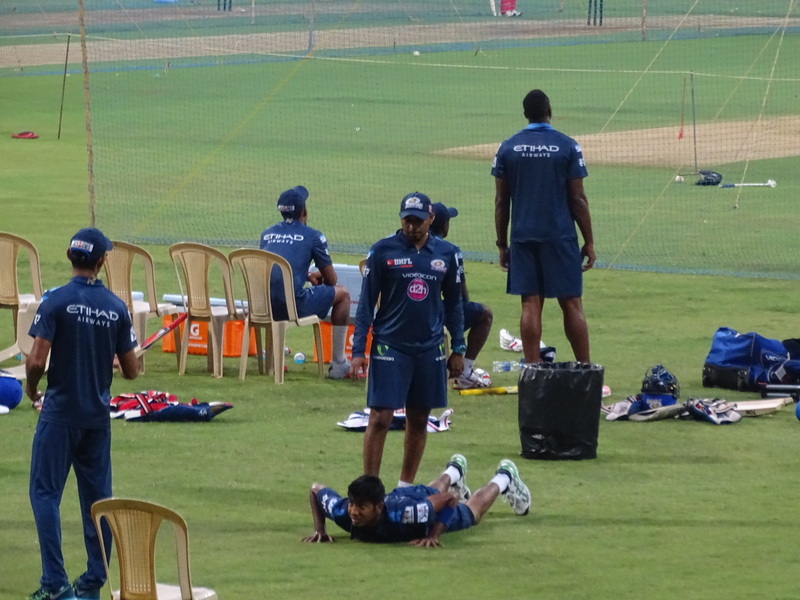 The Visitors acclimatizing themselves : 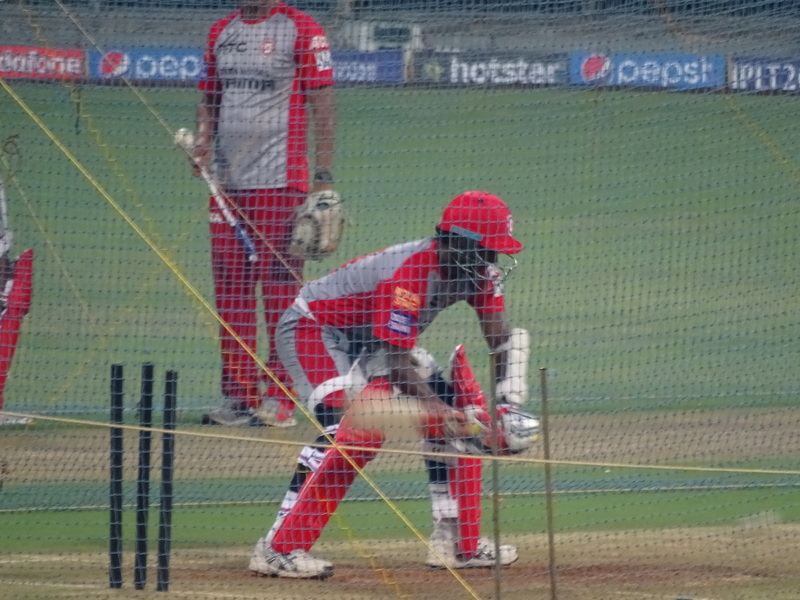 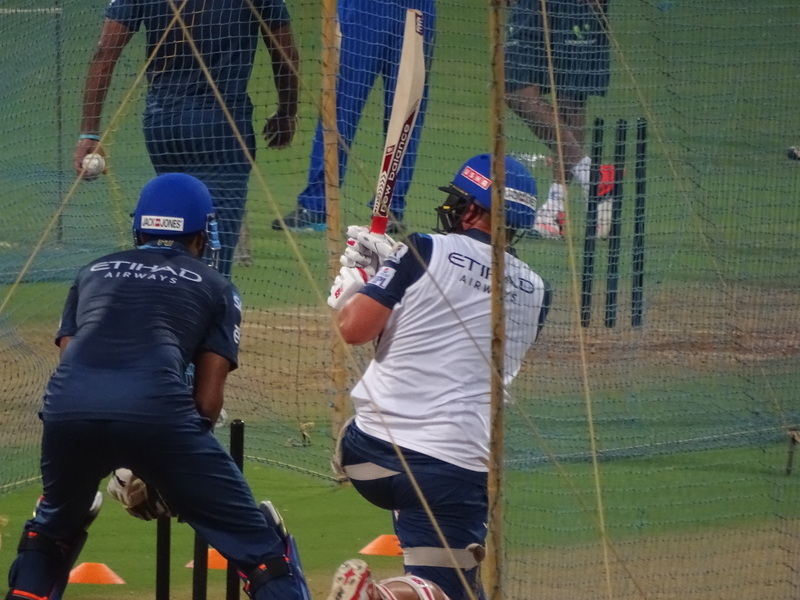 Kieron Pollard warming up to face a few in the nets : 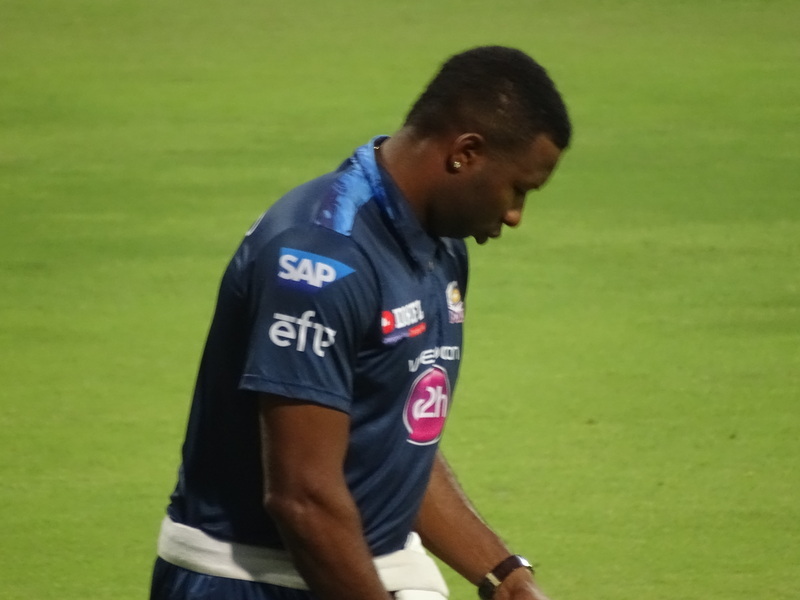 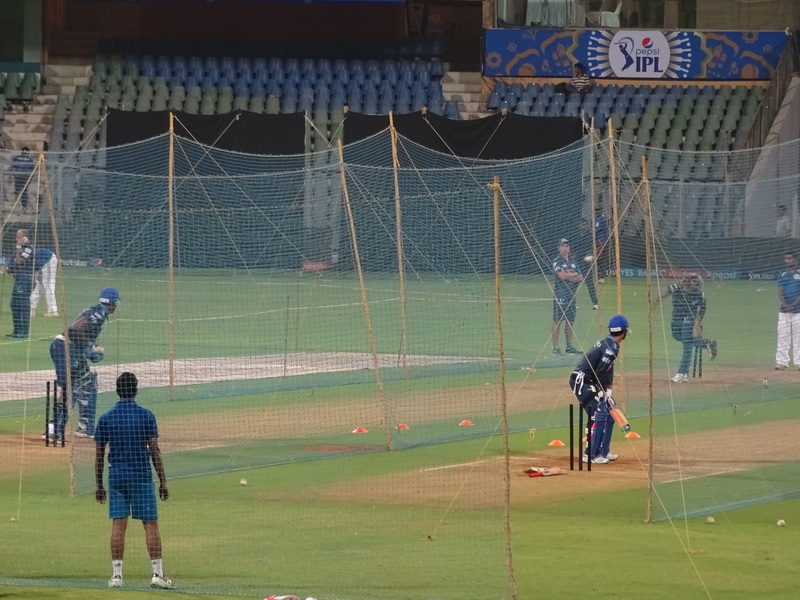 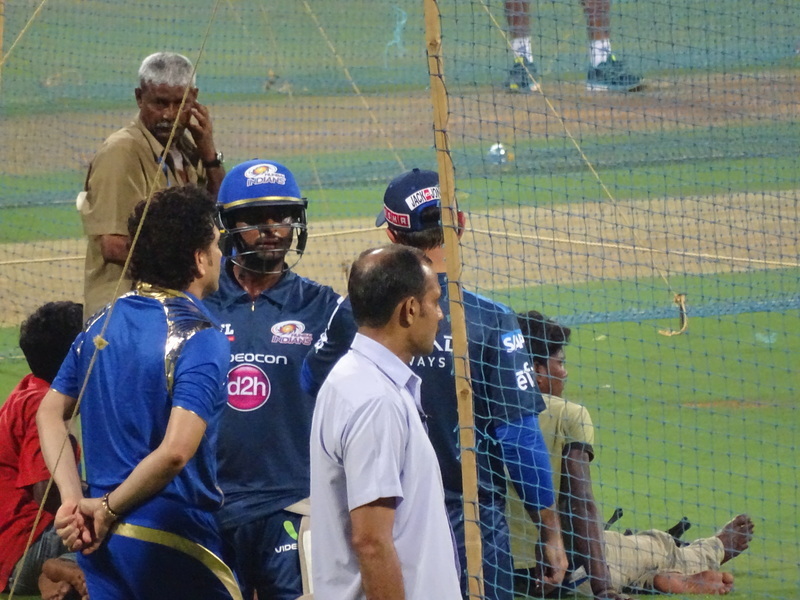 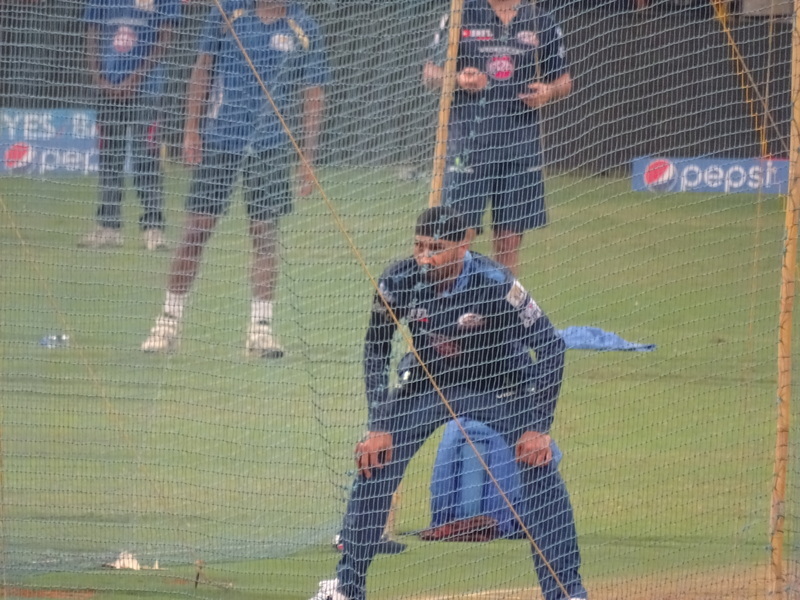 Aiden Blizzard in the Nets : 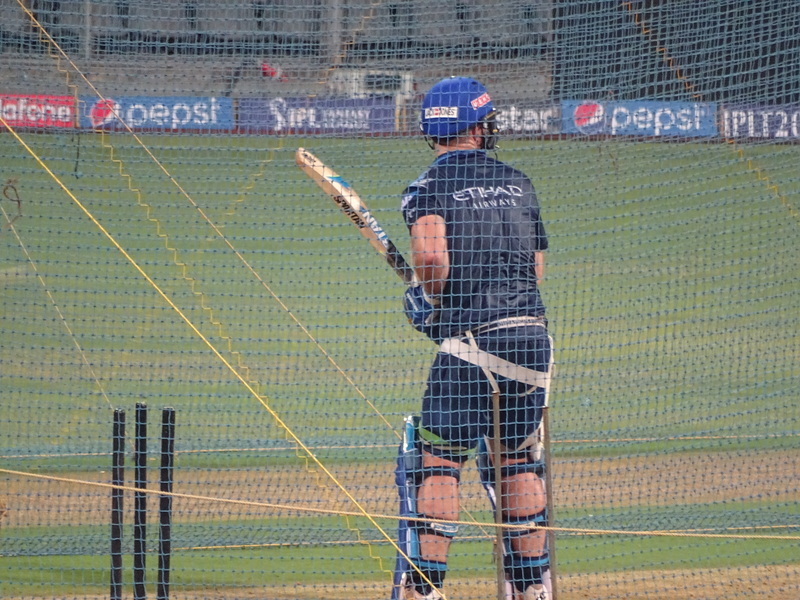 The Best Fielder in the World and the Fielding Coach for the Mumbai Indians Jonty Rhodes in his element : 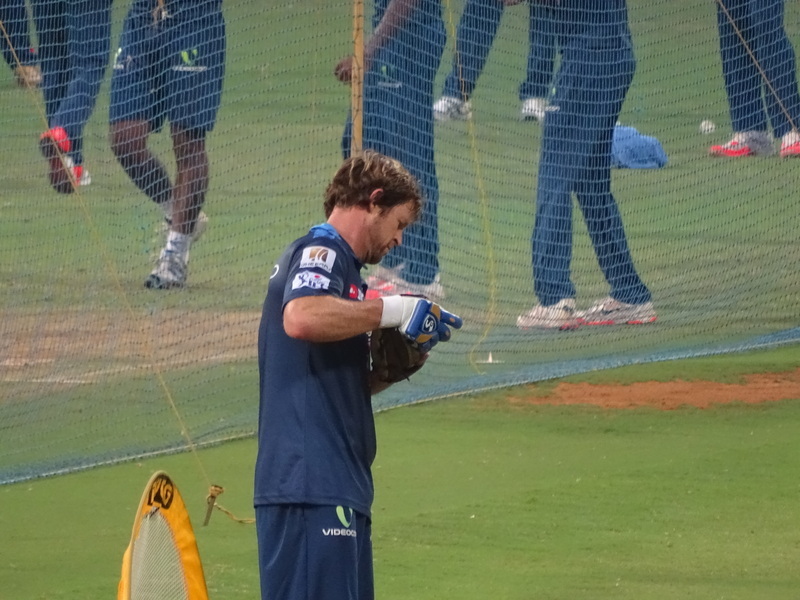 Mumbai Indians fine-tuning their fielding skills. Fielding is the 13th Man ( the Mumbai Crowd is the 12th ). Corey Anderson was really pushing himself! 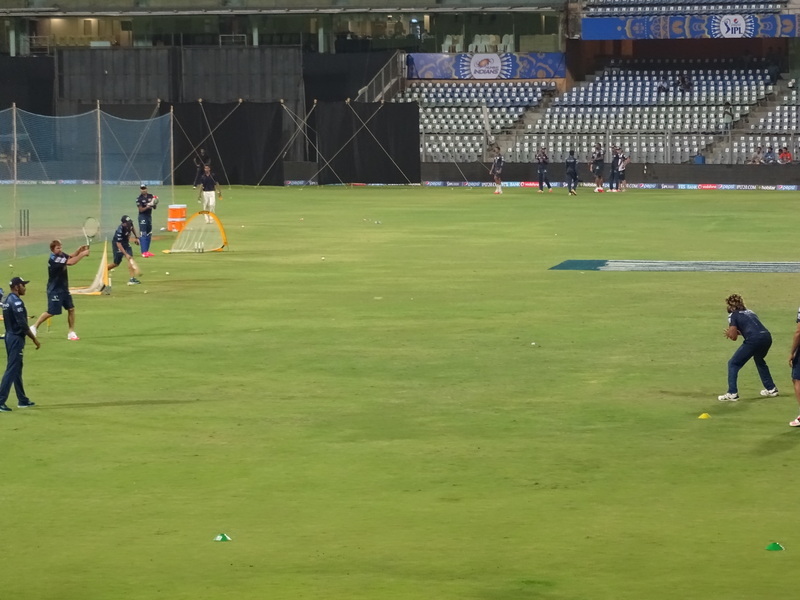 A Young Man by the Name of Sachin Tendulkar was smiling away to glory and enjoying his time on the pitch! 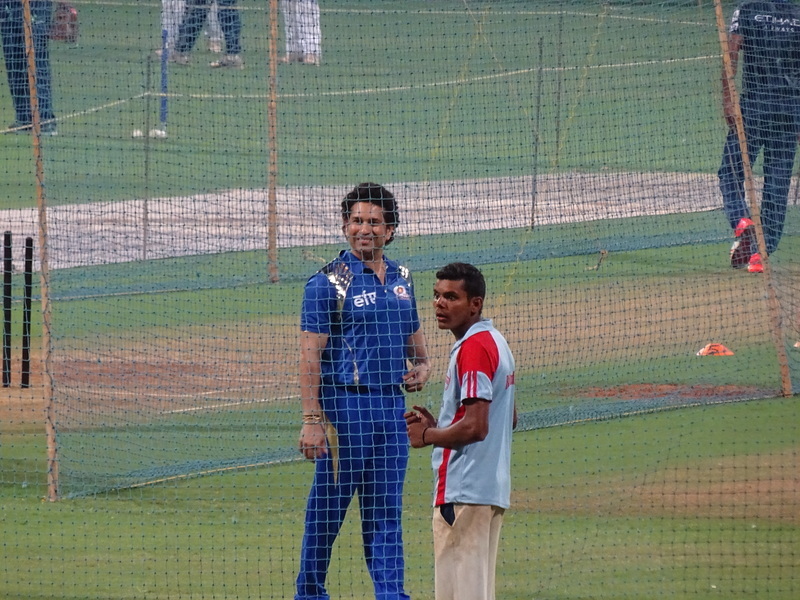 Mr. Rahul Razdan decided to showcase the Video Calling feature of JioChat and made a call to Mr. Akash Ambani who very graciously obliged! 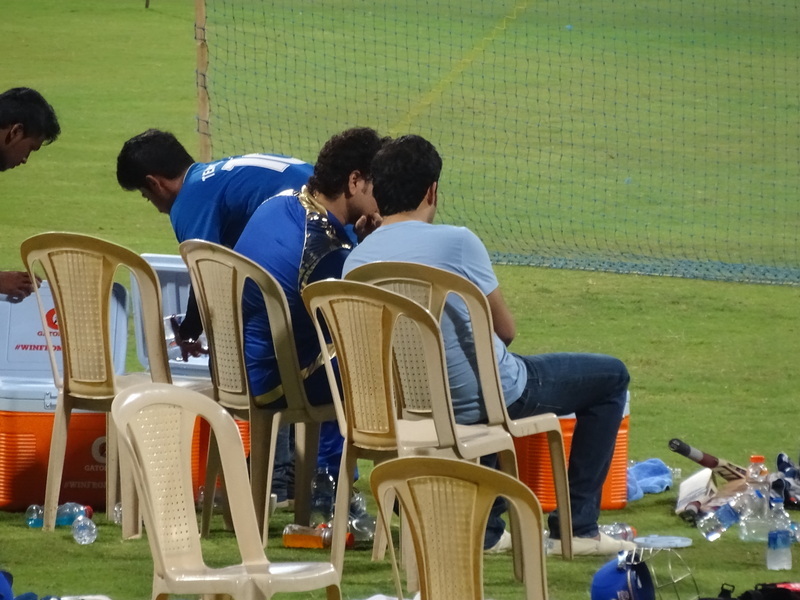 Then we got the chance to see the Legend on Video Chat, not only the Icon for Mumbai Indians but also a great ambassador for Cricket. The SUPERMAN FROM INDIA - MR. SACHIN RAMESH TENDULKAR!! 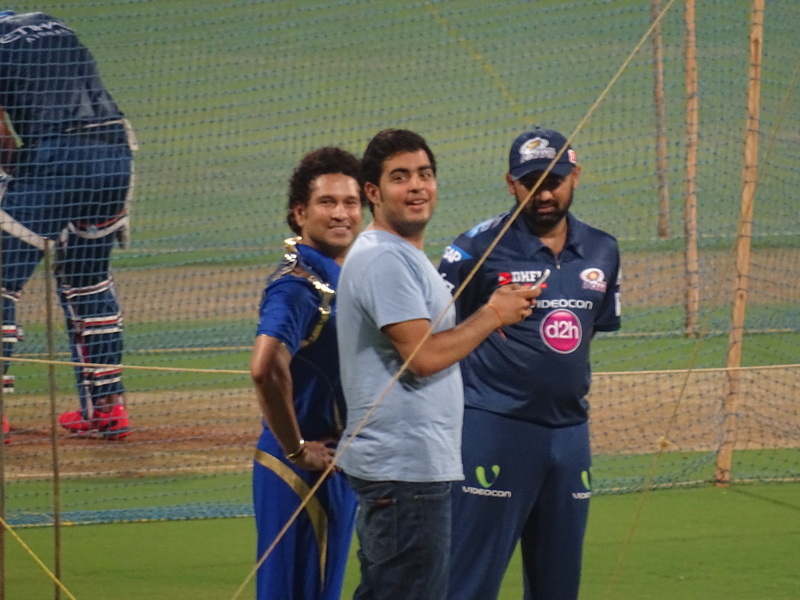 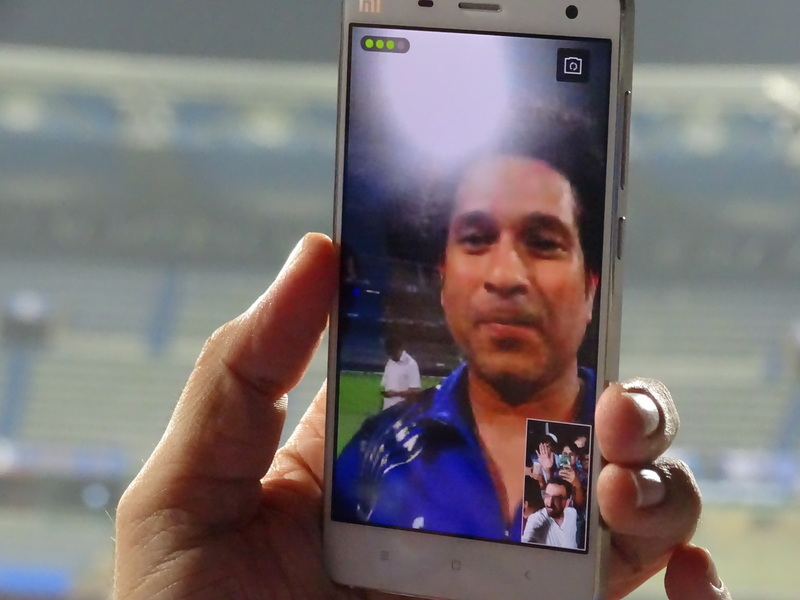 After a quick conversation, it was time to wrap things up.

The Mumbai Indians put in a good shift at practice : 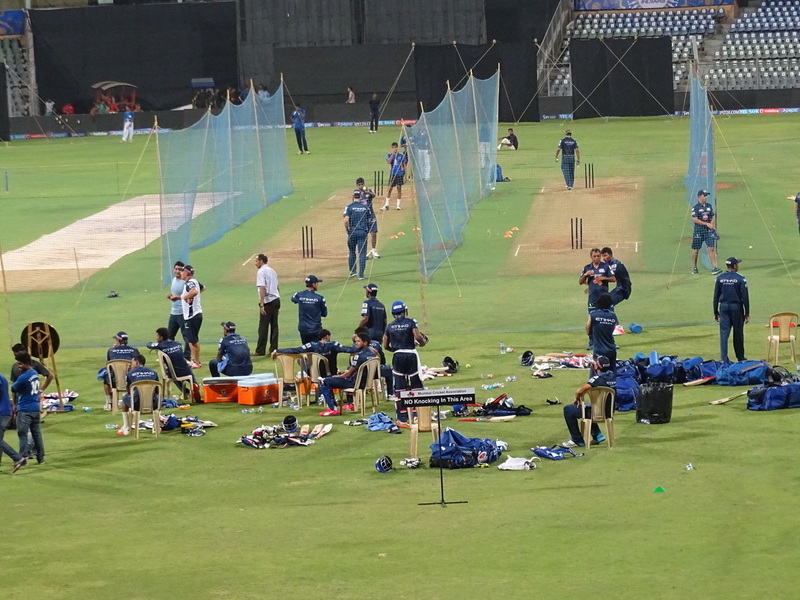 Ricky Ponting, the Head Coach for Mumbai Indians focused as ever! 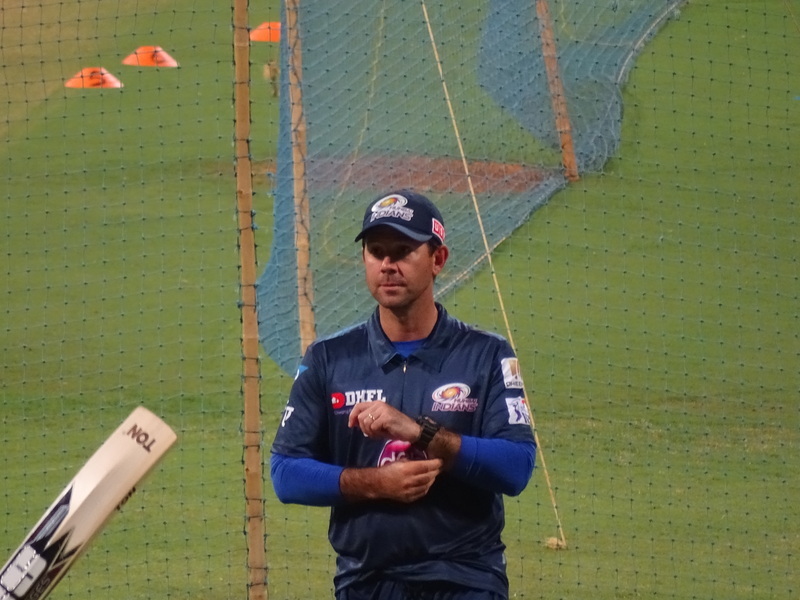 It was a great day at the Wankhede Stadium!

A Big Thank you to the Mumbai Indians for hosting us and helping us experience JioChat and JioNet!

JioChat is available on the Play Store / iStore.

There is more to come about these product offerings..soon..so watch this space!