The Grand Prix of Valencia was under great turmoil. Spain has been going through a financial blip putting terrible strain on the 2 Grand Prixs hosted by Spain - Catalunya, Barcelona & Valencia.

The Plans to have only GP hosted from next year seem to be gathering pace but Fernando Alonso might be the sole reason for the organisers to do a rethink of this.

The Local Hero Fernando Alonso made it to Q2 through the skin of his teeth. The Ferrari Chairman Luca Montezemolo suffered disappointment as both Ferraris failed to make it to the Final Qualifying Session, Alonso and Massa Started 11th and 13th respectively.

Many Experts predicted that the presence of youth upfront could cause incidents on the first lap itself... and a lot happened on the First Lap.

The 5 Lights went out polesitter Sebastian Vettel was able to get a powerful launch off the startline in his Red Bull and went into the first corner unchallenged, and Lewis Hamilton stayed second. Kimi Raikkonen got a good launch from 5th on the grid and challenged Pastor Maldonado but had to back off to avoid hitting him and his Lotus teammate Romain Grosjean took advantage to jump into 3rd. Kamui Kobayashi jumped from 7th to 4th, as Maldonado and Raikkonen dropped to 5th and 6th. The Ferraris of Fernando Alonso and Felipe Massa were the chief gainers on the first lap, Alonso moving from 11th to 8th and Massa from 13th to 10th. Force India were also running strongly at the end of the first lap, with Nico Hulkenberg and Paul di Resta splitting the Ferraris in 7th and 9th. The two men who lost out at the start were Nico Rosberg, who dropped to 11th from 6th and was just a single place in front of Mercedes teammate Michael Schumacher. Jenson Button in the second McLaren lost 4 places and was down in 13th.

Vettel built his lead as Hamilton struggled to keep Grosjean at bay ( The Lotus working perfect in the heat of Valencia ). Others also weren't far behind with Kimi trying a couple of moves on Maldonado but the Venezuelan was too strict on giving him space. Alonso had started pressurizing Hulkenburg as the duo started losing time against the lead pack.

Grosjean was finally rewarded for his efforts as he used DRS to muscle past Hamilton Lap 10 but Vettel had opened a comfortable 14 seconds lead. Grosjean then put in super quick laps and slowly started reducing the German's lead. Alonso finally found a way past Hulkenberg on lap 11 and was closing in on 6th Placed Raikkonen.

Raikkonen overtook Maldonado and Alonso followed suit, Maldonado was suffering from trye degradation. Kobayashi in 4th was in a similar situation and the Trio of Kobayashi, Raikkonen and Maldonado pitted on the same lap. A Slick Pit - Stop by Lotus and a poor one by Sauber helped Raikkonen jump Kobayashi. Alonso played the famous " Undercut " as on the trio when he rejoined ahead after his pit-stop which was a lap later.  Vettel pitted on Lap 15 maintained his lead.

Grosjean and Hamilton's Pit - Stop put them behind Di Resta and Rosberg but it didnt take them long to retake 2nd and 3rd positions respectively. Alonso, Raikkonen, Kobayashi and Maldonado had work to do as they were stuck behind the Non - Stoppers Schumacher, Webber, Senna who were losing pace due to tyre wearing issues. Alonso shot past Webber and Senna in a space of few corners and then Schumacher on the next lap. Schumacher and Webber pitted for a new set of tyres and Senna was the only obstacle now.

Raikkonen sensed the opportunity and overtook Senna before Turn 8. Kobayashi tried to tuck himself behind the Finn but Senna unaware of him had already moved across and the two made contact. Kobayashi damaged his Front wing and Senna suffered a puncture, forcing both to pit.

Grosjean was able to match Vettel's pace but the gap remained at 20 seconds.Hamilton was having a lone race and the duo of Alonso and Raikkonen overtook Di Resta to take 4th and 5th positions.

The Race took a dramatic turn on lap 27.  Jean-Eric Vergne tried to make a DRS-assisted pass on Heikki Kovalainen through turn 12. Vergne thought that his car was fully in front of Kovalainen but it actually wasn't and he ended up chopping his car straight onto Kovalainen's, puncturing his right rear tyre and Kovalainen's left front, and damage caused by the shredding tyres were spread all over the track. SAFETY CAR!!  Both Vergne and Kovalainen made it to the pits, with Vergne retiring due to suspension damage whereas Kovalainen was able to continue.

Safety Car sent the leaders into the pits. Hamilton's problem with the front-jack put him behind Alonso and Raikkonen. Daniel Ricciardo was the only one not to stop. Massa, Button and Perez were the biggest losers. The Top 6 : Vettel, Grosjean, Alonso, Ricciardo, Raikkonen, Hamilton.

The Race Restarted on Lap 35 and Grosjean was under intense pressure and Alonso overtook him at the First turn. Rosberg on Old tyres lost 5 places slipping from 7th to 12th. Massa and Kobayashi's battle for 13th ended in a retirment for the latter and a puncture for Massa.

A big shock awaited Vettel on lap 37. Coming out of Turn 10, Vettel lost power and the car simply came to a halt!!! ( Attributed later to an Alternator Failure ). Vettel was livid! The Frustration and Despair was so evident on the German's face. Hamilton overtook Raikkonen on the same lap to take 4th. This was a very important Lap in the Championship Battle.

ALONSO was now leading the race and a huge ROAR Erupted from all the stands!

Ricciardo's heroics didn't last long as his tyres ' fell of the cliff ' and he lost positions to Hamilton & Raikkonen. He finally pitted.

Schumacher was running 5th ahead of Webber, the latter suffering from serious tyre problems was passed by Maldonando and the two Force India cars within the space of a few corners. Webber had to pit. Schumacher was also on older tyres and pitted for a new set 3 laps later, rejoining in 11th pace, just ahead of Webber.

The race at the front of the field took yet another twist on lap 41. Grosjean who was running within a second of Alonso had to retire with an alternator failure suspected to be similar to that of Vettel's. The Frenchman distraught.

Alonso now had a 3 second lead over Hamilton, who was now under pressure from Raikkonen. Maldonado was 4th ahead of the Force India duo of Hulkenberg and Di Resta, the latter trying a one-stopper. He was soon under attack from Perez, who along with Button, had recovered back up to 7th and 8th.

Alonso continued to lead comfortably at the front, with Hamilton continuing to hold off Raikkonen for 2nd, the latter rarely allowing the gap to go over a second. Maldonado, Hulkenberg and Di Resta began to spread out, and the action behind was from Schumacher and Webber, who on new softer tyres were going around 2 seconds quicker than those in front of them. The duo picked off Senna, before closing in on and passing Button on lap 50. The tyres started to wear out for the other drivers and they fell into the clutches of Schumacher and Webber. The duo passed Perez 3 laps later and Di Resta after another lap to move up into 6th and 7th respectively. Hulkenberg was next and he too was dealt with on the penultimate lap, moving Schumacher into 5th and Webber into 6th, but it was not going to stay that way.

Hamilton in 2nd, in his attempts to hold off Raikkonen had pushed his tyres too much, and they started to wear towards the end of the race. Raikkonen patiently bided his time before passing Hamilton on lap 55 with two laps left.

Hamilton was now under attack from Maldonado, whose pace was strong enough to keep him out of the reach of Schumacher and Webber. Maldonado attacked Hamilton at turn 1 on the penultimate lap, but some strong defensive driving by Hamilton meant that he kept the place Maldonado tried again on the run down to turn 13 using DRS, with Hamilton taking the inside line and forcing Maldonado off the track. As Maldonado tried to rejoin, he clipped the kerb for the next turn and hit Hamilton, forcing him into the wall and out of the race. Maldonado himself lost his front wing, and dropped back down the order.

Hamilton was Furious and Maldonado was later penalised for this incident.

The race was won by Alonso, who became the first driver to win 2 races this year, and coupled with Vettel's and Hamilton's retirements also took the championship lead. Raikkonen took 2nd and Schumacher was promoted to 3rd, his first podium since in his return to F1.

Webber was 4th ahead of Hulkenberg, with Rosberg charging up to 6th on new tyres by passing Di Resta and Button in the last 2 laps. Perez suffered more tyre problems than others and crossed the line 9th. Maldonado had continued on without his front wing and was able to take the final point in 10th. However, he was given a 20 second time penalty for his collision with Hamilton and demoted to 12th, his teammate Senna taking the final point.

This was a Pivotal Race in the Calender as Alonso took the Championship lead. He had won the race from an unrealistic positon on a street circuit. This says a lot about the man.

The Podium featured 3 drivers who have been with Ferrari during their Careers in Formula 1 and all three have been World Champions in the past. 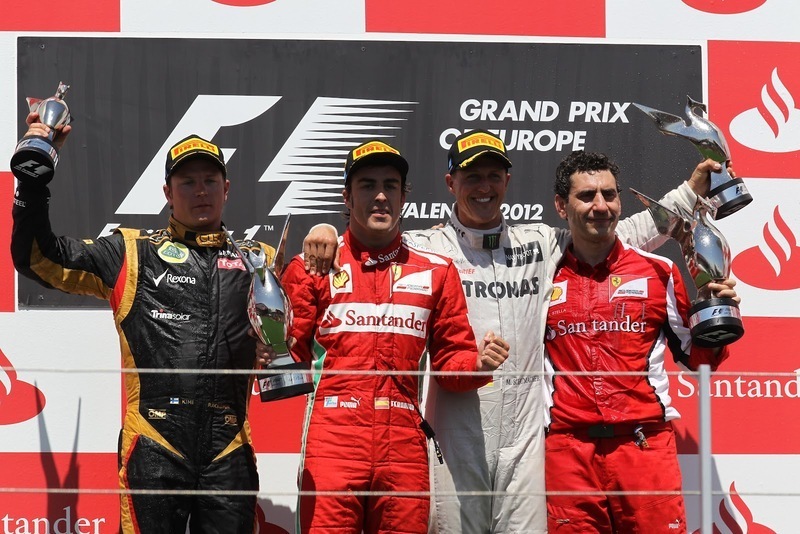