Formula 1 travels back towards the West and its First Stop is Korea. The Results of the Japanese Grand Prix have thrown the Championship Wide Open. Fernando Alonso knew that Ferrari needed to be on the top of the game and expressed his concerns at the lack of performance when compared to that of the Red Bulls.

Sebastien Vettel had pegged back Alonso's lead to 4 points after back-to-back victories in Singapore and Japan.

The Results of the Grand Prix would be pivotal in the Championship Battle....

The first free practice session took place in dry conditions. Lewis Hamilton ended the session as fastest driver, Fernando Alonso who had led most of the ninety-minute session was 2nd while Mark Webber finished in 3rd place.

Sebastian Vettel was fastest in FP2,leading Webber and Alonso. FP2 was an incident free session although Sergio Perez was forced out after 45 minutes of running when his Sauber lost all power and ground to a halt at Turn 12. Perez was able to safely park the car, allowing the session to continue uninterrupted.

Sebastien Vettel continued his dominance into FP3 while the two McLarens of Hamilton & Button slotted into 2nd and 3rd respectively. Red Bull's Mark Webber was 7th after electrical problems with his engine prevented him from getting a run at the end of the session on the 'super-soft' tyre most drivers are expected to use in qualifying.

Q1 was a very tense one for many teams. Sebsatien Vettel, Jenson Button and Mark Webber were the top 3 of the session.Narain Karthikeyan lost the rear end of his HRT and narrowly missed a Force India who was slowing for Turn 3. Fernando Alonso and Lewis Hamilton had big hiccups as they just made it into Q2 in 16th and 17th Positions respectively. Bruno Senna joined the Caterhams, Marrusias and the HRTs in the Elimination.

Q2 saw Daniel Ricciardo's Toro Rosso come to a halt. Sebastien Vettel was the quickest again. Jenson Button was the Suprise Elimination from the Session. Both the Saubers, Toro Rossos, Pastor Maldonado and Paul di Resta were also eliminated.

Q3 saw another incident when Michael Schumacher was released in the path of Lewis Hamilton however the incident was not pursued. Sebastien Vettel made a rare mistake in the first sector of his Second Flying Lap. The Mistake cost him Pole Position. Mark Webber pipped his Team-Mate to Pole Position. Vettel and Hamilton were 2nd and 3rd respectively. Alonso, Raikkonen, Massa, Grosjean, Hulkenberg, Rosberg, Schumacher completed the top 10.

Daniel Ricciardo received a five-place grid penalty for an unscheduled gearbox change. Charles Pic was given a ten-place grid penalty for exceeding the maximum number of engines permitted for use over the course of the season. Narain Karthikeyan failed to set a time after having a brake failure. He was allowed to race at the stewards' discretion.

The Five Red Lights went out and Sebastien Vettel jumped Mark Webber into First Place on the First Turn. Mark Webber fought back on the Straight into Turn 3 but the German held. It also ensured that no other car had space to challenge the duo on the straight. It was a great start from Fernando Alonso who leapfrogged Lewis Hamilton who got squeezed out at the start. The McLaren driver had a think about a move down the middle of the two Red Bulls, but the gap closed and he was forced to back off. This allowed the championship leader Alonso squeeze down the inside.

The Saubers had an eventful First Lap as both drivers had incidents. Jenson Button was a big loser. The McLaren driver made a good start, but a wreckless Kamui Kobayashi came flying down the inside at Turn Three, missed the braking and smashed into the front right tyre of Button, breaking the suspension and ending the 2009 world champion's race. A Frustrated Button later stated that the drivers should be wary of the techniques adopted as incidents such as these are unforgivable at this level of Motor-Racing. Rosberg too was another retiree, his car hit first by Kamui Kobayashi. Massa passed Raikkonen for 5th place while Kobayashi had to pit for a new front wing. Ricciardo had a brilliant start, rising from 21st to 15th, in his Toro Rosso. Kobayashi was penalised for hitting Jenson Button and Nico Rosberg.

Lewis Hamilton, Hulkenberg, Grosjean pitted on Lap 14 while Mark Webber, Felipe Massa and Kimi Raikkonen a lap later. Sebastien Vettel and Fernando Alonso pitted on Lap 16. Alonso emerged just ahead of Perez whose attempt to move past him backfired and he eventually lost a position to Hamilton. Perez on his wearing tyres was now falling backwards as Massa, Raikkonen passed him in the space of 2 laps. Kamui Kobayashi drove into retirement on Lap 18, a disppointing weekend for the Japanese driver after the joy of being on the podium in his home race only a week earlier.

Lap 21 saw another twist as Hamilton complained of Loss of Grip ( Attributed later to a Broken Anti-Roll Bar ) and was powerless to fend off Massa who overtook him comfortably using DRS. The Next Couple of laps saw some competitve and safe racing between Hamilton and Raikkonen. Raikkonen tried getting past under DRS on Lap 23 but Hamilton had enough to keep his position into the corner. However a lap later, Kimi was closer and went past him on the outside at the end of the DRS zone. However Hamilton made use of his remaining KERS to wrestle back the position from Raikkonen a turn later. Hamilton finally pitted on Lap 26 and the team had some trouble with Front Right Tyre causing a slight delay.

The Gap at the front was more or less unchanged until the second round of pitstops. Mark Webber was the first to blink when he pitted for a new set of soft tyres on Lap 32. Fernando Alonso pitted on Lap 34 and even a clean pitstop wasn't good enough to get him close to the Red Bull of Mark Webber. Sebastian Vettel had a huge lock-up on Lap 35 and was told by his team to pit immediately.

It was Status Quo at the front after the final round of pitstops.

Lap 38 saw Vettel set the Fastest Lap of the race and he had to be assured by the team that the gap to Webber was adequate enough and there was no need to push unnecessarily. Meanwhile Felipe Massa had closed in on Fernando Alonso and the latter found it to be a little too close for comfort. Ferrari however ensured that Massa would not harry Alonso by asking the former to stay withing 2-3 seconds of his team-mate. Ferrari's customary tactics did the job again as Massa yielded. Meanwhile Paul di Resta finally went past Michael Schumacher who had made this really hard for the British driver up until that lap. Their duel had given Perez an opportunity to close up and try a move on Schumacher but the German kept the door shut.

Lap 40 saw some more action as drivers started experiencing wear on their tyres. Grosjean went on the outside of the McLaren of Hamilton at the end of Turn 3. Hamilton, struggling on failing tyres positioned his car well and forced Grosjean wide; that allowed Nico Hulkenberg to close up and the three of them almost went three abreast towards Turn 4. Hamilton defended again, but Hulkenberg went around the outside of both Hamilton and Grosjean in an absolutely stunning move!!!

Fernando Alonso was now struggling and falling into the hands of Felipe Massa who was setting Blistering laps but the Brazilian had to hold station as instructed by Ferrari.

Hamilton did his 3rd Stop on Lap 43 and rejoined 10th. It had been a race to forget for the team with Button's retirement and Hamilton's lack of race pace after qualifying in such a promising position.

Hamilton's newer tyres had given him the much needed performance and he closed in on Jean-Eric Vergne ( Lap 47 ). The McLaren driver couldn't make a move stick down at Turn Three, but saved some KERS and used it in the run down to Turn Four. Hamilton pulled to the outside and tried to cut back, but Vergne didn't yield his position.

The track was falling apart by Lap 50, a huge embarassment for the organisers. Charles Pic ran over a bit of astroturf which has lodged itself free. A Williams ran wide at the same corner and kicked another piece up in the air.

Fernando Alonso seemed to have some life left in his tyres and was now catching the Red Bull of Mark Webber ( Lap 51 ), the latter however tried to maintain the gap around 4 seconds. The duo of Vergne and Hamilton had caught up with Ricciardo and an interesting battle was in store for the last 5 laps. Lap 53 saw Vergne go past his team-mate Ricciardo although Hamilton had to wait another lap.

The fight at the front was getting really intriguing. Red Bull was asking its drivers to nurse their tyres home!! Vettel was warned of unpredictable braking and the last couple of laps were tense for both Team and Driver.

An absolute nightmare awaited Lewis Hamilton on Lap 54. The McLaren driver picked up a piece of astroturf that attached itself to the side of the car and was seen flapping around. The Briton dropped back from the Toro Rossos as he struggled to keep control of an ill-handling car.

Sebastian Vettel's race engineer was on the radio again, telling him to be careful. The German backed right off and and coasted towards victory.

Massa, Raikkonen, Hulkenberg, Grosjean, Vergne, Ricciardo and Hamilton completed the top 10. Hamilton had to fend off a late charge from Perez on the last lap to grab the Solitary Point. 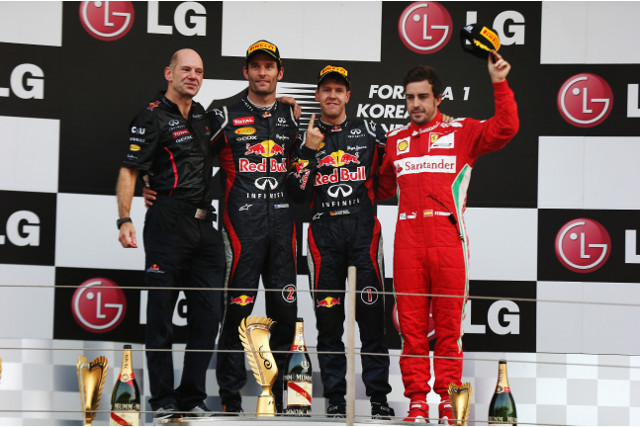 So Red Bull Celebrated its First 1-2 of the Season. Ferrari moved ahead of McLaren in the Constructor Battle but the Drivers' Championship now had a new leader.

Vettel had leapfrogged Alonso to lead the Championship by 6 points. The Red Bulls are now going from strength to strength. Vettel notched up his 4th win of the season, 3 consecutive wins for the German.

The Lotuses of Kimi Raikkonen and Romain Grosjean gathered good points as Kimi extended his lead over Hamilton to retain 3rd place in the Drivers' Championship Standings.

Kimi Raikkonen was also the only driver to have finished every race this season.

The Next Round is India!!! I shall be in the Paddock again as a guest of the Lotus F1 Team, so lots of photos coming your way... soon.