This is that time of the year when the Football Season is over, everything is done and dusted, the European league teams are busy regrouping, restrenghtening their squads. The Transfer season is in full swing as Players leave clubs for others to get more lucrative deals.

This season though all this will take a backstage, albeit for a period. Club Rivalries will be put aside, football lovers will unite as one force to support their national team!

The Euro is the here & this time its Poland & Ukraine who host it!

The Contenders to the crown are : 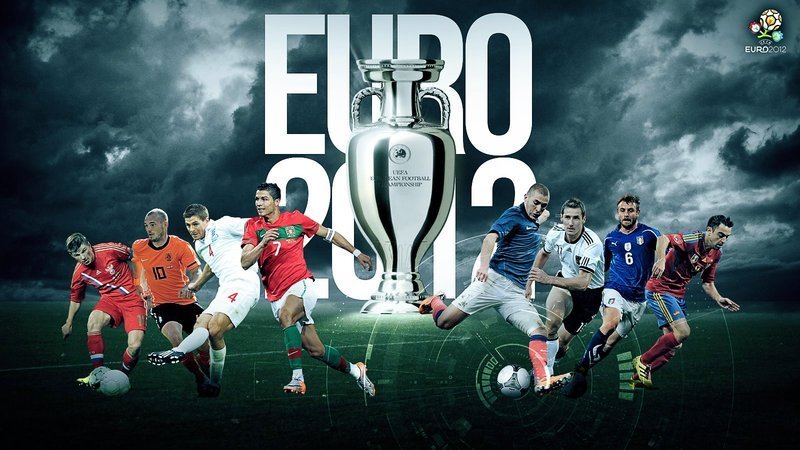 Teams that should make it to the Knock - out Stages :

Group A features the 2004 Champions Greece. Greece was definitely a surprise winner in 2004. Russia & Czech Republic have world class players. Poland unfortunately doesn't offer much to challenge the other three in the group. This Group is not an easy one even though it doesn't feature the more glamourous teams. Russia & Czech Republic should advance from this group.

Group B - THE GROUP OF DEATH!! We definitely have 3 top contenders for the crown in one group!! Netherlands are known for their strength in depth & their fascinating style of football. However they haven't had enough silverware to show for all their efforts. Germany showed fantastic form in the World Cup and also in the Qualifiers. Portugal have a star - studded lineup & they would definitely want to reward their fans with the cup. Cristiano Ronaldo will be looked upon as the one who can lead them to the Cup single-handedly! However their biggest weakness is team - spirit. Denmark aren't pushovers either & are known to produce upsets. The Experience of playing in the top leagues of Europe would definitely help the Danes. It's a very tough call - Germany & Netherlands should advance.

Group C features the 2008 Champions Spain. Spain is my favourite. They have literally trampled the opposition in the qualifiers. The 2010 World Cup Winners have also silenced critics by showing they are not chokers when it comes to the big stage. Italy, 2006 World Cup Winenrs have had a very torrid road to the Euros. Mercurial Perfomances, an Ageing Team, Match - Fixing Scandals in Serie A have definitely disturbed their focus leading upto the Tournament. The Azzuris though have the knack to defend exceptionally if they get the lead. Republic of Ireland have some top players in their ranks. The experience of Captain Robbie Keane will definitely help them on the field. Croatia became famous when they knocked out England in the Euro 2008 Qualifiers. The Players playing in the Premier League didn't get the best welcome. Croatia is definitely the Dark Horse in this group. This might be a bold prediction but Spain & Croatia would advance, although it would be better for Italy to advance rather than Croatia from a neutral's point of view.

Group D - Teams that have a lot to prove. France have been on the decline since their 2006 World Cup Final Defeat. Their lack of performance inspite of having some of the best talent in Europe baffles me. Their Road to Qualification wasn't an easy one either. Their failure to advance would definitely shock football lovers. England have been the lion that needs to wake up from its slumber. Fantastic talent has come & gone & yet the team has underperformed, be it the World Cup or the Euros. The saclking of Fabio Capello was a big mistake. Roy Hodgson has definitely shocked supporters by listing a team that has snubbed some quality players. The Inclusions of some has amused experts too. Only time will tell whether the decision was right or wrong. Ukraine seems to be in the same state as their co-host. They might only be also - rans. Sweden have been a close - knit team. They have been known to play around their more talented players. This Euro shouldn't be any different. England should top this group, France should clinch the other spot. Sweden is good but not good enough.

Spain, England, Germany, Netherlands should be the Semi - finalists. Spain vs England would be a dream final.