2016 has been an year of retirements - Audi leaving WEC, Mark Webber retiring, Felipe Massa retiring from F1. Jenson Button taking a 'sabbatical' ( sounds more like retirement to me ), Lionel Messi retiring from International Football only to return later ( thankfully ).

The most heartbreaking news was of the Brazilian Football League Team Chapecoense's players losing their lives in a plane crash.

Last Sunday we saw Nico Rosberg crowned as the 2016 F1 World Champion. Today we see him at the FIA Press Conference at the Prize Winning Gala announcing his Retirement from the Sport!

This has definitely come as a shock as I was engrossed in writing about the 2016 Season Review over the past few days and relishing the battle that could have been between the Mercedes team-mates in 2017. The Dynamics of the battle would have changed. Well all this is now futile and Nico has made his decision.

What made him take such a drastic step? Wasn't it too early to call it a day? What are the options for Mercedes in 2017?

Damon Hill was the only member of the Father-Son World Champion Club. Nico Rosberg joined the club after he finally achieved his dream in 2016 when he beat his team-mate and Triple World Champion Lewis Hamilton to the crown.

Mercedes have been the best since the start of 2014 and in Lewis Hamilton, Nico had a formidable opponent. Lewis was in it to win it, pretty straightforward. In terms of raw pace, Lewis had the advantage as well. Nico was the hard-working guy, putting in the hours and sadly came up short in 2014 and 2015. In 2016, he looked a different driver on the grid, a man who had taken on the mantle of beating Lewis and he accomplished it on many occasions. The best drive for me was in the Final Race in Abu Dhabi when Nico faced all odds to win the Championship.

The F1 season is pretty long and unforgiving. Drivers, Team Personnel, Media all are away from families and loved ones for almost 8 months; add to that the pressure of winning a championship, its emotionally and physically draining.

When Nico looked the best bet to win the Championship, a lot was said about him. Bernie Ecclestone, F1 Supremo quipped that Nico would be a 'Boring Champion' should he win. Many Media Houses ( whose names I choose not to mention ) had a clear bias towards one driver and tried to unsettle the competitors in interviews by asking controversial questions. Many Fans considered him 'lucky' to win the championship. Lewis Hamilton Loyalists even concocted conspiracy theories that a German Works Team would want a German World Champion and they sabotaged Lewis' car to help Nico win. Everyone is aware about the Mechanics Swap theory too. The Season has ended but still some Lewis Hamilton fans have not stopped ridiculing or mocking Rosberg. Ofcourse this is part and parcel of sport and each one of us swear by a driver but we can never know the range of emotions a man can go through when he is in the limelight and sometimes considered inferior to another. Our opinions remain opinions at the end of the day and the truth will remain the truth. Nico Rosberg is the World Champion, he is the best driver of the 2016 grid. We must accept it, whether we like it or not.

Nico is a very pleasant guy and always believed that he needs to be a great ambassador for the sport. In my brief interactions with him as well as observing his demeanour with the fans, he has obliged everyone with photos and autographs regardless of loyalties. He has faced the boos, the jeers of the crowd with a smile on his face and silenced all critics with his drives this year. He was always a team player, evident from the many races that he raced in.

I can completely understand and identify with his decision to retire. He wanted to win the World Championship, he has done it, he is at the zenith, there is nothing more to achieve and its time to move on. We all know what it meant to him when his emotions took over after the race was done.

I must admit that I expected a better response by Lewis Hamilton to the news of his mate retiring. They have raced together since they were 12. Lewis & Nico might not be friends anymore but one must be more gracious in defeat.

You cannot extend an Olive Branch today and burn it the next day.

Was it too early to retire?

Nico is only 31. Raikkonen, Alonso are past the 35 mark and still plying their trade in F1. Kimi has been asked multiple times about his retirement from the sport ( implied ofcourse ) and his response is the same - "The day I stop enjoying the sport, I shall retire". Pretty simple. Mark Webber said that while driving his Porshce 919 Hybrid he thought "What am I doing sitting in this car".."The day you think like this its time to hang up your boots". Nico had revealed in his interview that after the 2015 US GP, he was distraught and never wanted to feel the way he did that day. I think that was a big hint. He had channelized all his energies to go for glory in 2016 and maybe avoid failing again. Once he achieved it, he was done. Many will say that he should stay and defend his title, well he thinks otherwise and we must respect that. He chose to end on a high and I believe he will let it stay that way.Michael Schumacher returned in 2010 and his record in his 2nd stint was nothing compared to his 7 Championships in the First, so in that vein of thought, its a good decision.

What are the Options for Mercedes in 2017?

Nico's retirement decision came a bit late for Mercedes. Top Teams have their drivers locked down under contract for 2017. Mercedes can look to their "Driver Program" and hire the services of young Pascal Wehrlein for 2017. If they do, I fear another Kvyat saga repeating itself. Pasacal has been in F1 for only one year. He is quick but his inexperience could bring pain to Mercedes in the Constructors' battle. Ocon has moved to Force India so he is out of contention.

Nico Hulkenberg who recently moved to Renault would be ruing a missed opportunity.

Daniel Ricciardo and Max Verstappen would not leave Red Bull for 2017. There are a lot of changes, mainly on the aerodynamic side and Red Bulls are the masters of it. They gave the Mercs a run for their money in 2016, so next year they would be hot on their heels. They might end up in the slower team should they choose to leave.

Sebastian Vettel had a tough year in Ferrari but as he stated earlier, he wants to win a championship with Ferrari ( just like Schumacher ), so activating an exit clause seems unlikely.

Fernando Alonso is advancing in years and wants another championship under his belt. I am not aware of his contract clauses but if he insists on leaving McLaren it would be another painful separation. Also would Mercedes risk a Hamilton - Alonso pairing considering what happened in 2007? I highly doubt it!

Valtteri Bottas could get a step up considering that he is managed by Toto Wolff ( Mercedes Supremo ) and Mika Hakkinen.
He has a considerable number of races under him and is a consistent performer.

Kimi Raikkonen, not a chance but as a fan I don't mind including him in the discussions. He doesn't care obviously and he is happy at Ferrari so...

My pick would be Valtteri Bottas though I think Mercedes will persist with Pascal Wehrlein for one year and reassess their options for 2018.

Finally returning to Nico Rosberg, I shall miss him. Nico was the driver I supported after Kimi Raikkonen ( Finnish Connection ).

Almost everyone in the F1 World is in a state of shock but that is how unpredictable a sport can be. I am thankful to God that I got to meet him in Hockenheim in 2014 and this year in Spain.

Nico has new challenges in life, a family to raise, a wife and daughter to love and cherish and I am fully confident that the man will emerge a winner in life too! The Family that stood by him, supported him helped him win this Championship. Its now time for him to love and cherish this family and I wish him all the best for the future!

He fought the fight, he ran the race, he won the Championship and now his name is etched in the annals of F1 Racing History as the 2016 F1 World Champion! 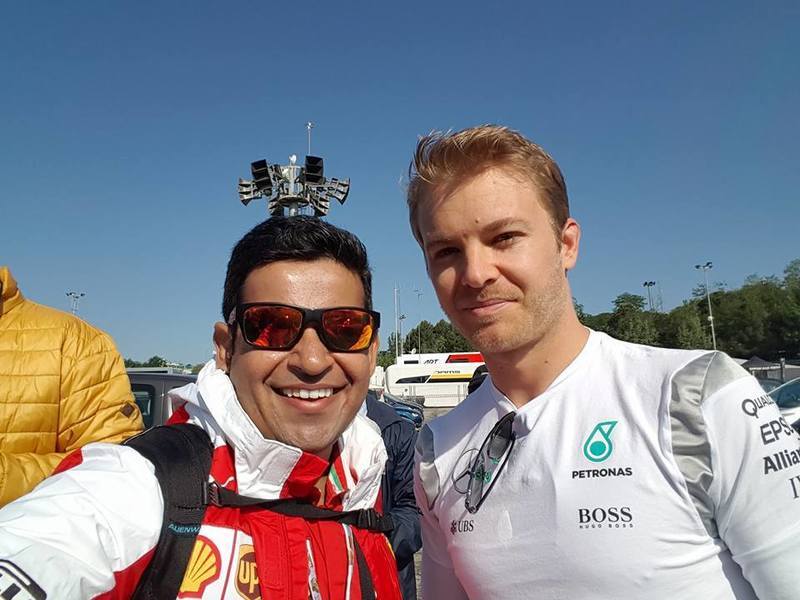 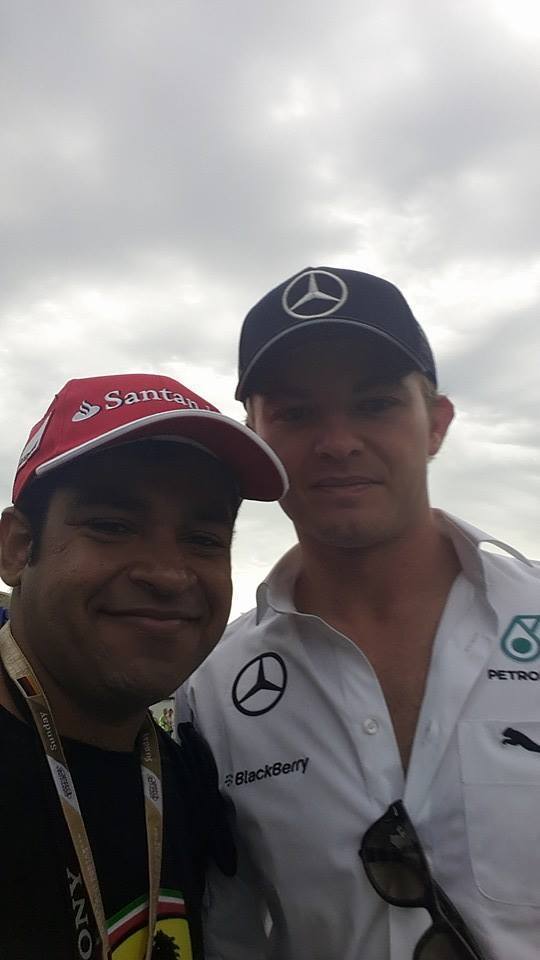