Circuit de Spa-Francorchamps is the home of The Belgian Grand Prix every year. Many drivers rate it as the best circuit on the calendar.  Kimi Raikkonen, my racing hero, earned the title of "King of Spa" for his brilliant performances here.

I have had the privilege of attending 4 races here - 2015, 2017, 2018 & 2019 and each experience was unique. Nestled in the Ardennes mountains, the track offers views that can only be rivalled by The Red Bull Ring in Spielberg, Austria and even then the latter might not appeal to all. Iconic turns like Eau Rouge, Raidillon, Les Combes, La Source, Blanchimont, the Bus Stop dot this legendary circuit, a great many battles have been fought here. The weather is very unpredictable with instances of heavy rain in one sector and bright sunshine in another. The 1998 & 2008 Belgian GPs were testaments to the weather playing havoc. The track also offered quite a lot of challenges with regards to marshalling and extrication of stricken cars due to its old-school layout but its a circuit like no other!

This circuit will kickstart my "F1 Travel Guide" series!! 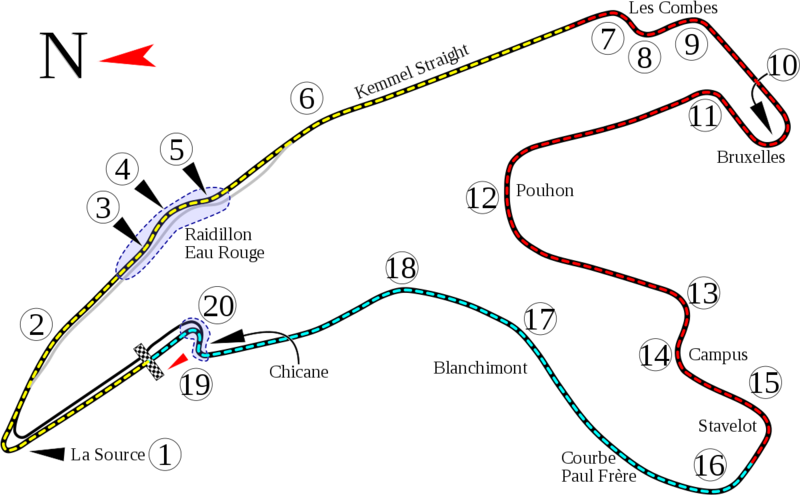 The Circuit is located in the town of Stavelot, close to a town called Spa ( the town famous for the Mineral Water company called Spa ) in the region of Wallonia. Nestled in the Ardennes Region, it is also close to the Nurburgring and its older brother Nordschleife ( better known as the Green Hell ) circuits situated on the German side of the hilly region ( also worth a visit ).

Brussels Airport ( BRU ) is a major hub for all international airlines, serving most European Routes, The Americas, Middle-East and Asia.

I fly Emirates to Brussels via Dubai, multiple connections every day! The Experience is shared here :

Dusseldorf Airport ( DUS ) is another major hub ( on the German side ) catering to all the above routes as well.

Cologne Bonn Airport ( CGN ), is closer than Dusseldorf but offers limited connections to the region via the Middle-East.

Brussels South Charleroi Airport ( CRL ) is another hub for low-cost carriers in the city of Brussels.

There are a few other major airports like Frankfurt, Paris, Amsterdam, Dortmund but I wouldn't recommend them since they go beyond the 200 km radius of Spa-Francorchamps.

The Towns of Spa, Stavelot, Verviers, Malmedy, Theux are the closest to the circuit and offer a lot of options from Hotels to Inns, Chalets and B&Bs. The rates are inflated over the race weekend and it is highly recommended to book at least 6 months in advance to get a good deal ( most of these are non-refundable rates ). The town of Spa is full of F1 Drivers & Personnel and many oblige those waiting with an autograph or a selfie! Camping is very popular in Europe and the circuit has some fantastic camping sites for those who prefer to bring in their RVs or set up a camping spot over the weekend.

There is also a Hotel "de La Source" near Turn 1 of the circuit but its sold out ( almost always ) on the race dates. There are other inns and B&Bs near the circuit but be wary of the exorbitant rates over an F1 weekend.

I prefer giving all the above a miss...

The circuit is also close to big cities like Liege ( Belgium ), Aachen ( Germany ), Maastricht ( Netherlands ) and Hasselt ( Belgium ). Hasselt is the furthest of the lot with the commuting time from the other three being only about 35 to 40 minutes. I haven't stayed at Liege ( yet ) ( haven't heard great reports about safety either ) but Liege is yet another town that fills up pretty quickly for the race weekend. Maastricht and Aachen see a great number of F1 fans and can cater to all budgets. Aachen is the livelier of the two with a mini Oktoberfest happening on the same weekend as F1. Maastricht boasts of equally good restaurants and bars and one can easily become a part of conversations over a drink or a meal! All these cities are well connected to the circuit by rail and the circuit organisers also offer a shuttle service to the track.

The above shuttle can cater to fans coming in from Brussels or Amsterdam as well but one must be wary of the travel time which is 4 hours each way. This only gets longer on a Sunday!

Hasselt is my city of choice for the weekend. I have stayed in the city twice ( 2017 and 2019 ). It is only about an hour away from the circuit and offers great hotels at very economical rates. A Park Inn by Radisson costs about 50 Euros a night and there are some options even around the 20 25 Euro mark! The city is also the birthplace of the Rising Dutchman Max Verstappen.

The city has quite an interesting layout, designed in a circular shape...one can go around the bustling parts of town and come back to the starting point easily. The city has some fantastic places to wine and dine, not to forget the bakeries offering Speculoos, the spiced shortcrust biscuit! My friends and I drove down through the weekend and navigation in and out was easy with a parking pass. However, do note that the city isn't covered under the shuttle bus service ( so maybe one can pay the town a visit post or pre-race weekend ).

The cities of Cologne and Luxembourg are 2 other options that are well connected both by rail and shuttle. I did stay in the former during the weekend of the 2013 German GP held at Nurburgring but if one doesn't hire a car, I wouldn't recommend staying there.

The circuit isn't the easiest the get to, the expansive layout of the circuit and the forests surrounding it pose a considerable challenge with regards to navigating your way around the track. It can house around 70000 spectators with the stands majorly being around the start-finish straight, the Bus Stop, La Source and Eau Rouge and Raidillon sections. The other areas are general admission viewing areas and a good level of fitness is required to hike up and down the various pathways in and around the circuit. Some spots offer unparalleled views of the circuit so it is worth the effort! The weather is unpredictable ( as mentioned earlier ), so be prepared for the heat, the cold or the rain!

Over the F1 weekend, there are a lot of access restrictions and parking spots can be quite a long walk from certain stands. There is a circuit shuttle which helps reduce commute but is infrequent. Its highly recommended that one studies the circuit map well and opts for appropriate parking passes. There are taxi stands as well but they tend to be overcrowded on evenings (especially post-race ), so its best to wait until a couple of hours after the sessions ( or race ) to easily hail one. If you do hail a taxi to the circuit then be prepared to walk for 30 minutes to reach the grandstands or the paddock club parking area. The Paddock Club runs a shuttle for the VIP guests from thereon.

One of the most frequented zones/areas of an F1 track are the Merchandising shops. There are stores spread across the track and some on the approach road to the Main gate of La Source. There is a heavy concentration of stores at that roundabout, even watches ( Casio Edifice ) are sold there. Those were the only stores selling Alfa - Romeo F1 Merchandise.

The largest concentration of stores ( catering to almost all needs ) is at the F1 Village which is on the outside of the circuit between La Source and Eau Rouge. A lot of Fan events such as performances, drivers' meet and greet, F1 Personnel Interviews and games like Simulator Skills test, Pit Stop or Batak Challenges are held. Those who ace the F1 Simulators get couple passes of the Paddock Club for Sunday! There are a lot of food stalls and Beer Stations along with lounging areas for fans to enjoy the action on track thanks to the giant screens put up there. I have never missed visiting this village, one of the largest on the calendar.

A Pit Lane walk is offered on Thursday to the 3 Day ticket holders. Its a once in a lifetime experience for many. You even get to walk the track and some have been fortunate enough to meet their favourite drivers on their track walks! There are also Drivers' Autograph sessions, details for which are shared by the organisers closer to the dates. It is imperative to reach early to bag that special sign and possibly a selfie with the best in the world of motorsport! F1 Experiences, the official hospitality partner to F1's worldwide races offers various packages and upgrades to existing tickets...these include guided paddock tours, a photo-op with the Race Winning Trophy on Pit Straight, a tour of the Track on the Parade Truck.. a great way to add to the memories made over the weekend.

Finally, the fans are allowed to enter the track after the end of the race and when deemed safe by the marshalls ( better known as "track invasion" ). This is a must-do! I had the privilege of walking up the entire length of Eau Rouge and Raidillon in 2015 and the elevation change is unbelievable!

Apologies in advance for missing any other detail. I shall update this article/guide when I make another visit to the track...the chances of this in 2020 seem bleak..but we hope for the best! Stay home, Stay Safe everyone!