The German Grand Prix was a regular feature on the F1 Calendar and produced some memorable races. The track where this race was hosted alternated between the legendary Nurburgring and Hockenheim circuits. Nurburgring couldn't host more events post 2013 ( due to financial woes ) and Hockenheim became the permanent abode for the German Grand Prix ( 2014 onwards ). The country, home to multiple F1 greats, be it drivers or constructors like Mercedes has seen some incredible racing over the years.
The 2019 German GP was voted as the "Race of the Decade" by the fans!
However, citing financial issues, the race was sadly taken off the calendar for 2020. The season hasn't kicked off yet due to the Covid-19 pandemic and after the cancellation of many races from this year's calendar, there is a glimmer of hope that this circuit might make an unlikely return.
I had the honour of attending the 2014 and the 2018 editions. 2014, was my first as a guest of Scuderia Ferrari F1 team while 2018 saw Vettel make an uncharacteristic error and crash out of the lead. Kimi Raikkonen was the saving grace that day after he finished P3 with a very compromised strategy. Who can forget how the heavens opened after the race came to an end!


My experience from the 2018 German Grand Prix : 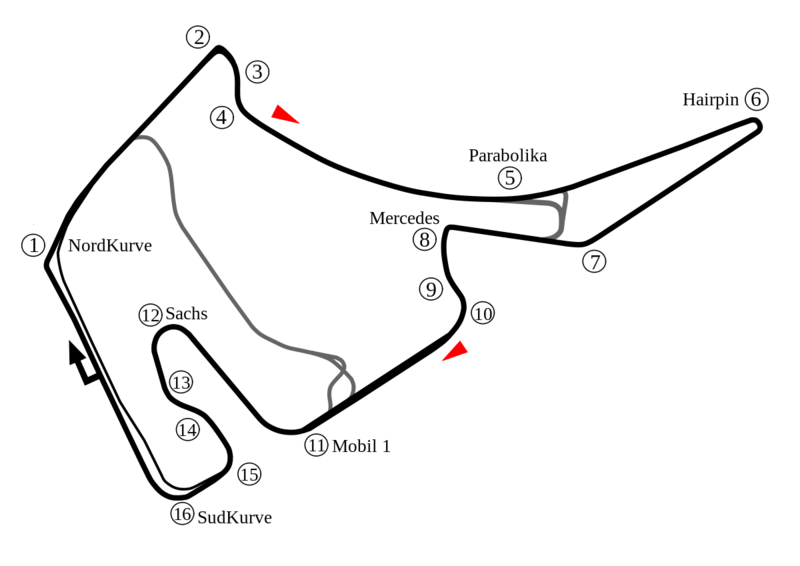 The circuit is located at a short distance from the town of Hockenheim in the Rhine Valley in the Baden-Württemberg region. The circuit is well connected by road ( thanks to the high-speed Autobahns of the country which run into the neighbouring countries as well ), rail ( DB Bahn ) and even air! It is also close to bigger towns like Mannheim and Heidelberg and cities like Frankfurt and Stuttgart!

The Closest Airport is Mannheim City Airport but it is used majorly for Chartered Travel.

Frankfurt Airport ( FRA ) is the airport of choice for almost all F1 travellers. The busiest airport in Germany caters to a large number of International Carriers bringing in flyers from all habitable continents. It is also the main hub for the National Carrier Lufthansa. Lot of low - cost European carriers offer connections to Frankfurt from major European cities.

Stuttgart Airport ( STR ) is another point of entry, albeit further away and caters to several European and a couple of Asian Carriers.

I chose to fly on Emirates to Frankfurt via Dubai. The 2018 Experience is featured here :
https://tech-know-crat.posthaven.com/the-flying-diaries-bom-fra-bom-emirates-first

Accommodation options in the town of Hockenheim are limited and tend to get sold out early in the year.
Walldorf is another town which offers a few options and its a 10-minute drive to the circuit. However, most of the hotels are occupied by the teams over the weekend. One can still try and book a room at inflated non-refundable rates and probably meet someone famous from the paddock at one of these properties.

I chose to stay in Frankfurt during the 2014 race weekend; the commute was good on Friday but come Saturday and Sunday, an early departure ( around 7 pm ) was advisable to make it in time for the morning sessions.

In 2018, I considered staying in the town of Heidelberg, a city well frequented by other tourists as well. However the options there were quite expensive; besides the "touristy" element, a lot of F1 Media and Personnel choose to stay there which explains the inflated pricing and limited availability. Heidelberg is situated on one side of Autobahn 6 while on the other side is the city of Mannheim!
Mannheim is the third-largest city of the region and one of the important commercial and economic hubs. The accommodation options are many and prices are relatively cheaper than those on offer in Hockenheim or Heidelberg. Mannheim is also the only city which offers direct connections to the circuit via rail ( more on that later ). This is the city of choice for me if I were to make plans in the future. I chose the Radisson Blu which is close to the city centre and also used by the FIA and the Safety car Drivers over the weekend!

The ones who plan to rough it out would be glad to know that the circuit offers some great camping facilities! A lot of fans flock to Hockenheim from all over Europe over the weekend.
More Information is available here :

The circuit is extremely well connected to various cities of Germany and beyond by their efficient road networks and the Autobahns. The commute from Frankfurt can vary between 60 to 90 minutes ( depending on the traffic over the weekend ). The commute from Mannheim ( via Autobahn 6 ) and Heidelberg ( via Autobahn 5 ) is about 30 minutes. It is best to opt for car hire and buy parking passes over the weekend. There are a couple of taxi drop-off points but they can be a considerable walk if one doesn't opt to use the circuit shuttle. Taxis are sparse on the return journey as well so its advisable to wait longer at the circuit post-race.
This is the only way of a commute if one chooses to stay in Walldorf for the weekend.
By Rail :

DB Bahn is a great way to travel across the country. Major Cities are well connected to the station in Hockenheim. There are circuit shuttles which ply from the station to the circuit, the distance is about 3 km. Commute time from Mannheim to Hockenheim is about 20 minutes, from Heidelberg & Frankfurt is about 45 minutes & 75 minutes respectively. All connections run via Mannheim.

Tickets can be purchased from https://www.bahn.com/en/view/index.shtml
By Air :

Helicopter Transfers are also available for those who wish to fly into the circuit. A lot of the F1 Drivers use this mode for travel.

More information on all these options can be found here :
https://www.hockenheimring.de/en/info/directions-parking/

The F1 Village is located behind the Main Grandstand and has a semi-modern feel to it. There are a plethora of merchandising outlets ( the Official F1 Store included ) selling different team merchandise. Outlets selling Michael Schumacher Merchandise are always crowded and there are some unique items on sale at the Official Circuit Merchandise outlet as well.

The Village is also a hub for off-track activity, be it Simulator Experiences or Fan Q&A sessions or Pit Stop and Reaction Time ( Batak ) Challenges. Food & Beverage options are pretty good with the "Frankfurter" outlets being the most popular. The village is well planned and I never came across the issue of over-crowding on any of the days.

There are smaller merchandising and F&B outlets behind other grandstands as well.

The circuit is home to some of the most passionate fans and the Mercedes Grandstand is one of the star grandstands. It offers some of the best views of the track and its popularity has increased all the more, thanks to the dominance of the Three-Pointed Star in the Turbo Era.
Friday is an open-access day to most of the grandstands so fans can take in views from different sections of the track!
3-day Ticket Holders can enjoy a Pit Lane Walk, Driver Autograph Sessions and a Track Walk on Thursdays. There is trackside commentary in English and German.
It is advisable to carry rain gear as torrential rain isn't uncommon. The drainage facilities need to improve though; a lot of the access tunnels and roads got flooded after the race in 2018.

The circuit changed in 2002 and although a part of the old circuit layout is now a forest, it is a nice walk in the woods for race fans.

The Hockenheimring Museum is a must-visit for those who love racing history. There are also track days organised for those who wish to hire supercars or bring their own for a round of the track; for those who want to indulge in some racing, there are go-karting facilities in and around Hockenheim!

Hockenheimring has so much history about it and Germany has contributed so much to the world of F1. It is unfortunate to not see this track on the F1 Calendar anymore but I still believe that it might make a return either this year or the next and if it does, then one must draw up plans to be at the legendary German Grand Prix!